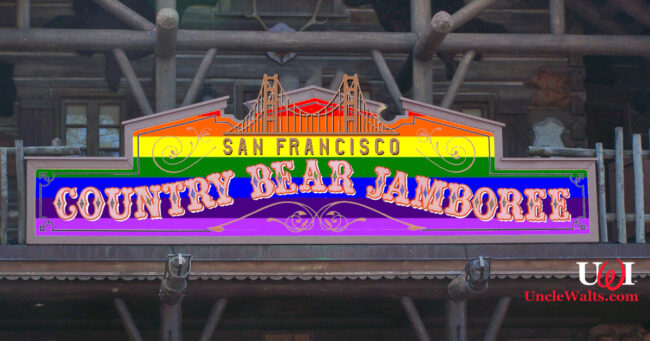 Oh, there will still be “bears.”

MAGIC KINGDOM, FL — The Walt Disney World Resort and Spa and Center for Societal Change has announced a new project, sure to excite parents of all genders! Disney is continuing its current project (called “Woke Kingdom,” according to insiders) by re-theming the beloved attraction Country Bear Jamboree.

We caught up with Disney (the company) spokesbeing Jun Disney (no relation) to find out more.

“This is just one more step in solving all of the world’s problems! We tackled racism by getting rid of Splash Mountain — and we rose 47 points on the Woke Scale with that one.”

“Next up,” Disney (no relation) continued, “we’re going to solve homophobia! All it will take is another re-theme. Country Bear Jamboree is going to go under the knife, some of the bears more than others, and will get a new overlay we’re calling ‘San Francisco Bear Jamboree.’

“We will feature bears, but, you know, not the animal variety. Rest assured, there will still be catchy tunes to sing along as various ‘bears’ in various states of undress perform for guests. You can expect all colors of the LBGATPZKY+ community to be represented, as well as updated songs. My favorite new song so far has been ‘Thong on the Saddle!'”

We pondered this new attraction and asked, is it age appropriate?

“Of course,” Disney (no relation) said. “We’re not actually going to show any sort of adult material! We’ll just talk about it in great detail. At least during the day. *wink*

“Our late-night, adults-only show? Yeah, better leave the kids with a sitter for that one, but please, bring your adult children! And remember, kids age 10 and up are considered to be adults by Disney!”

Uh? Let us know in the comments below!

Cover photo: With a sign like this, at least it’s not likely to be mistaken for the original show. Photo by Matt Dempsey [CC BY-SA 2.0] via Flickr, clipart.me, & Wikipedia Commons.

April 16, 2022 by Walt in Florida
© 2020 Uncle Walt's Insider. All rights reserved. All images used with permission. Unless otherwise attributed, all images licensed under Creative Commons CC0 license. This site is protected by reCAPTCHA and the Google Privacy Policy and Terms of Service apply.