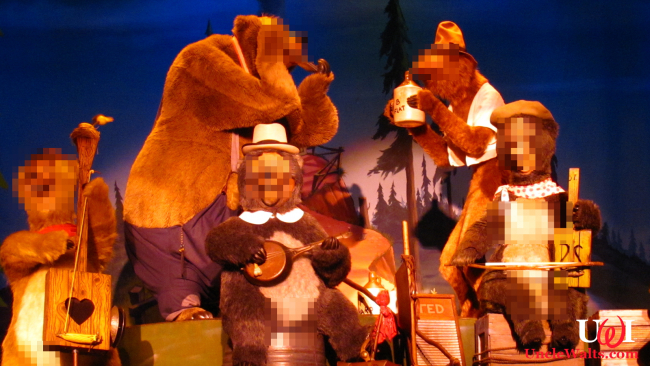 WALT DISNEY WORLD, FL — The Magic Kingdom’s Country Bear Jamboree is a beloved but poorly-attended attraction. Now, though, a new late-night review — geared for mature audiences only — may breath life into this aging show.

You must be this old to ride

As Uncle Walt’s Insider reported in August, Disney first experimented with risque material with the Monsters Inc. Laugh Floor. Since then, the Magic Kingdom has seen its late-night crowds swell, and most are heading for Tomorrowland to catch Buddy Boil and his line-up of foul-mouth monster stand-ups.

“The response has been so positive that Disney is considering making the attraction adults-only all the time!” according to Disney (the company) spokesperson Jun Disney (no relation). “And now we’re looking to do the same for the Country Bears.”

So what would a Country Bears show for mature audiences look like?

“I can’t give too much away,” Disney (no relation) says. “But Trixie will definitely have a greater role in the production. And it won’t be just bear sex, we’ll add violence, too. I can’t wait for you to see how we handle ‘Blood on the Saddle’ now!”

Disney (no relation) is excited for the show’s new direction.

“It’s going to be so hot. It may create a whole new meaning for the phrase ‘whupping Little Buford’!”

What do you thin… You know, for once, we don’t want to hear your comments on this. Never mind.

November 15, 2018 by Marty in Florida
© 2020 Uncle Walt's Insider. All rights reserved. All images used with permission. Unless otherwise attributed, all images licensed under Creative Commons CC0 license. This site is protected by reCAPTCHA and the Google Privacy Policy and Terms of Service apply.