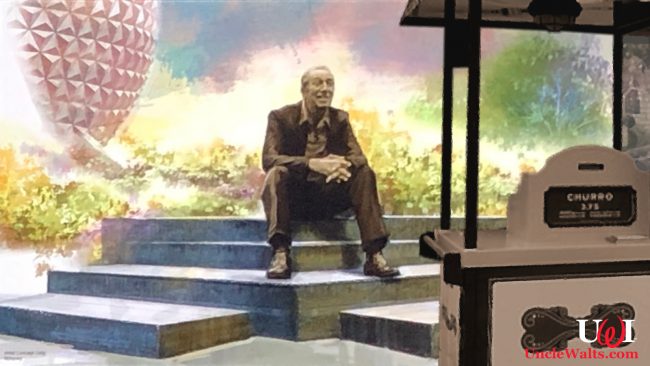 WALT DISNEY WORLD, FL — Much of the news out of the D23 Expo and Spa a little over a week ago concerned changes being made to Epcot Centre. In addition to previously-covered items, such as the dismantling of Spaceship Earth and retheming of all Epcot restrooms to Moana, the park is also getting a statue of Walt Disney.

The statue, to be installed in a new area called Dreamer’s Point, is said to honor Walt as “the original dreamer.” Early concept art shows a seated Walt Disney looking out with satisfaction over what his dreams have accomplished.

If you can dream it, you can do it. And then you can eat it.

But Uncle Walt’s Insider has learned that there is more to the story. Disney is actually looking with satisfaction at a churro cart.

The churro, as Uncle Walt’s regular readers [Ed.: Five of you now? Six?] know, was actually invented by Walt Disney himself, along with Doritos chips and nuclear power. So it is fitting that the E.P.C.O.T. statue of Walt will celebrate the realization of his greatest dream: the churro!

Do you think the statue churros will be edible? Let us know in the comments below!

September 5, 2019 by Marty in Florida
© 2020 Uncle Walt's Insider. All rights reserved. All images used with permission. Unless otherwise attributed, all images licensed under Creative Commons CC0 license. This site is protected by reCAPTCHA and the Google Privacy Policy and Terms of Service apply.