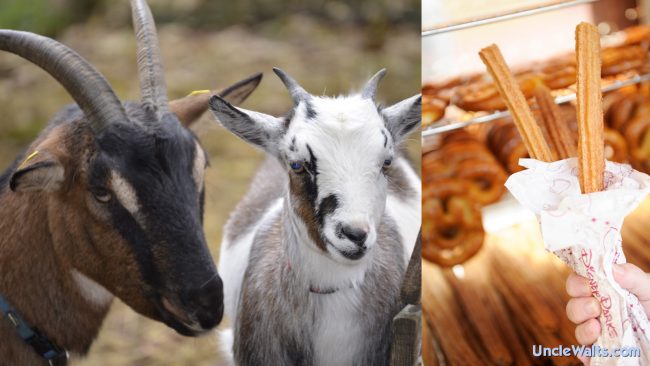 Warning: this article may cause distress and is not suitable for small children. Goats will like it, though.

Following last week’s shocking news about the arrest of an unnamed cast member attempting to steal the heavily guarded churro recipe, Uncle Walt’s Insider has learned about another incident involving this beloved treat, this time on the west coast.

CAUTION: this news is disturbing. We urge you to make sure no small children are in the room.

Churro – a tasty treat with a historic past

It is no secret that Walt Disney was a foodie. He loved his chili from a can — and not just any brand, but Hormel. He would enjoy a scotch mist at the end of a long day as well. But he also loved churros. In fact, the internet is full of photographs of Walt walking around the parks enjoying his favorite cinnamon-sugar covered treat.

Churros originally were introduced in 1956 when Disneyland guests complained about long waits. Space Mountain would often post ridiculous wait times of 20 minutes or longer! Walt told his team to take immediate action to find a way to pacify guests (and make more money), and the churro was born! At least into the Disney Parks.

The churro vendors in the queues have been replaced with churro carts stationed around the park. Guests are no longer allowed to bring this hallowed treat onto rides with them, but that has not changed the passion for them. The Churro Society of Southern California reports that membership continues to grow each year, and there appears to be no end to this phenomenal growth.

This brings us to our most recent news. The tribe of goats that inhabit Big Thunder Mountain recently were released into the park by accident, when maintenance employee Sam Sherpenkowski failed to secure the ride’s gate after he filled the water and fuel on each tender for the various trains on Big Thunder Mountain Railroad.

This is not a new phenomenon, as the goats have been found wandering the parks in the past, most notably when one was found swimming in the lagoon at the Finding Nemo Submarine Voyage. However, this is the first time the goats have caused a crisis at Disneyland. The rock stars manning the churro vendor carts arrived to find their supply of tasty churros had been eaten.

Cast member Harold Yu talked with Uncle Walt’s. “As we arrived to the cheers of our fans and as the security detail unlocked the vault we discovered that all of the supply of churros had been eaten by the goats.”

Yu continued, “While we had walls made of steel and reinforced concrete, we only had a tarp covering the vault. The goats climbed up using empty churro boxes that we had stacked next to a wall, ate the tarp, and then helped themselves to the churros. Boxes and all! It was the most amazing thing I have ever seen!”

Disney officials quickly put out a statement stating that only the morning supply of churros were affected, and all carts were fully stocked by 1:37PM after a new delivery was sent from the warehouse under police escort. Plans to air drop the churros were cancelled due to high winds.

Under California Proposition 64, Uncle Walt’s Insider must inform you that binge-eating churros could lead to diabetes, cinnamon-sugar dependency, obesity, long naps, and happiness derived from something other than your own centered chi.

Love Churros? Let us know in the comments below!

Churros in cover photo by Øyvind Holmstad [CC BY-SA 4.0 (https://creativecommons.org/licenses/by-sa/4.0)], via Wikimedia Commons. Actually, the photo of the churros, not the churros themselves.

February 7, 2018 by Walt in California
© 2020 Uncle Walt's Insider. All rights reserved. All images used with permission. Unless otherwise attributed, all images licensed under Creative Commons CC0 license. This site is protected by reCAPTCHA and the Google Privacy Policy and Terms of Service apply.