Hall of Presidents to be replaced with "Hamilton Live! Featuring the Muppets"! - Uncle Walt's Insider

Hall of Presidents to be replaced with “Hamilton Live! Featuring the Muppets”! 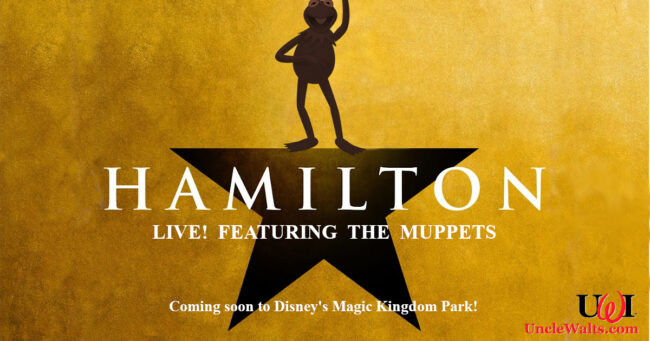 It combines two things everyone loves: Lin-Manuel Miranda, and Miss Piggy as Angelica (and maybe Eliza, too).

BAY LAKE, FL — The Walt Disney Company has announced yet another major change coming to the Magic Kingdom, this time in Liberty Square. The venerable Hall of Presidents is scheduled to be replaced with a puppet show about a Secretary of the Treasury.

That’s right. The Hall of Presidents is being replaced by Hamilton, as portrayed by the Muppets.

Something about Corporate Synergy

“I love the Hall of Presidents. It’s a Magic Kingdom opening day attraction, and it is an institution. But it’s time for a change. Our guests have told us that they love the air conditioning in that show, but are pretty neutral about the show itself. So we decided to make a change.

“We looked around the company for ideas. As it turns out, we own the rights to Hamilton, and we own the rights to the Muppets. Hamilton is the most popular Broadway show in years, and just had a very successful premiere on Disney+, well, except for the servers crashing.”

“And the Muppets have long been associated with new ways of presenting content that already exists. It’s really a great combination. Plus, when we closed ‘The Muppets Present Great Moments in American History’, guests sent us tens of letters asking for more Muppets. And really, who can’t picture Kermit rapping ‘My Shot’?”

D’Amaro didn’t announce any details on timing or casting, but we are assuming that Kermit the Frog will be Alexander Hamilton, Sam Eagle will play George Washington, and Miss Piggy will play at least one of the Schuyler sisters.

This is not Disney’s first theme park excursion into the world of Hamilton, having run it as a stage play in Hollywood Studios and placing references to it in the Hall of Treasury Secretaries at Animal Kingdom.

BONUS: Disney has released the first preview trailer for the new attraction! Enjoy!

From the trailer, maybe Fozzie is Washington. Who should Sam Eagle play? Not Burr, right? Comment below!

July 8, 2020 by X in Florida
© 2020 Uncle Walt's Insider. All rights reserved. All images used with permission. Unless otherwise attributed, all images licensed under Creative Commons CC0 license. This site is protected by reCAPTCHA and the Google Privacy Policy and Terms of Service apply.