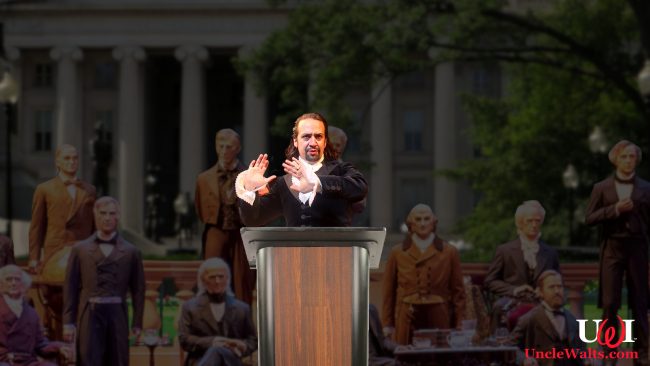 WALT DISNEY WORLD, FL — Tucked into a corner of Disney’s Animal Kingdom Theme Park and Spa, between Africa and Pandora, is a new attraction: Disney’s Hall of Treasury Secretaries. The new show features animatronics of every U.S. Secretary of the Treasury, from Alexander Hamilton all the way up to whoever holds that job today.

Hamilton writer/composer/star/prop guy Lin-Manuel Miranda was on hand to dedicate the attraction. Manuel dazzled the crowd by freestyling a rap that incorporated the names of every Treasury Secretary in under 60 seconds.*

As the keepers of the flame of Disney purity, we at Uncle Walt’s Insider admit to being perplexed as to how the attraction fits into Animal Kingdom. So of course we reached out to Disney (the company) spokesperson Jun Disney (no relation).

“We’ve been wanting an America-themed something in Animal Kingdom for some time,” says Disney (no relation). “After all, the Magic Kingdom has Liberty Square, Epcot has both the American Adventure Pavilion and the New Jersey Pavilion, and the Studios has ‘Sam Eagle’s Salute to All Nations But Mostly America.’

“As you know, we first tried tacking on ‘Marlin’s Patriotic Flag-apalooza’ at the end of Finding Nemo: the Musical. That… was a mistake. So we knew we needed something else.”

But how does a Hall of Treasury Secretaries fit into a park dedicated to animals? Disney (no relation) became defensive: “Hey, back off. A lot of them rode horses. We looked it up!”

*Miranda later admitted to us that he made up most of the names, correctly assuming no one in the audience would know the difference.

Have you ridden a horse and want to be installed in Animal Kingdom? Let us know in the comments below!

Cover photo: He has to holler just to be heard, but with every word he drops knowledge. Photos by Steve Wise & Ken Lund [CC BY-SA 2.0] & Steve Jurvetson [CC BY 2.0] via Flickr, all jumbled up and remixed by Marty.

February 7, 2020 by Marty in Florida
© 2020 Uncle Walt's Insider. All rights reserved. All images used with permission. Unless otherwise attributed, all images licensed under Creative Commons CC0 license. This site is protected by reCAPTCHA and the Google Privacy Policy and Terms of Service apply.