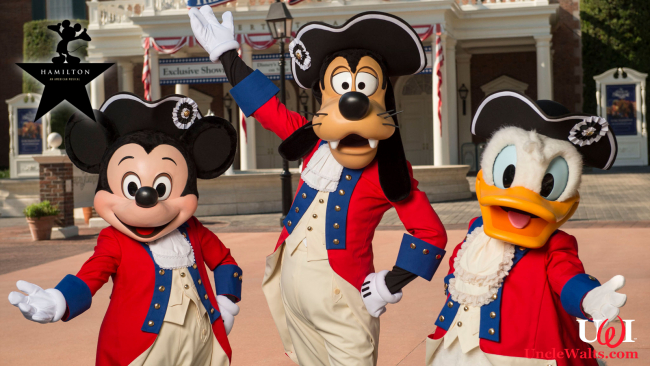 And Lin-Manuel Miranda vows to read his Disney contracts more closely in the future.

WALT DISNEY WORLD, FL — Beauty and the Beast: Live on Stage at Disney’s Hollywood Studios has been rumored for replacement for some time now. Uncle Walt’s Insider can now confirm its successor, and this is huge news: Hamilton is coming to the Theater of the Stars!

We caught up with David DeLoach, General Manager for Entertainment at the Studios.

“We are so excited about this show coming to Walt Disney World!” DeLoach says. “We thought that having a Star Wars area was going to boast park attendance, but with Hamilton here, the numbers will go through the roof.”

Will it be the exact same show as on Broadway, we wondered?

“And it will have special Disney touches you won’t find anywhere else. For example, Mickey will be playing Alexander Hamilton; Goofy will be Aaron Burr (“And I’m the darn fool who shot him! Hyuk!”); and Minnie, Daisy, and Clarabell will be the Schuyler sisters.”

“It’s definitely going to be something different,” Hamilton creator and star Lin-Manuel Miranda. “Maybe not my first choice to turn my show into a Disney theme park attraction, but, well… let’s just say it’s been a learning experience.”

Miranda continued, “Also a learning experience? I’ve learned I need to read my contracts with Disney a lot more closely. I thought I was just signing on to write some songs for Moana, and suddenly Disney owns the rights to Hamilton, and I’m locked into acting in at least five Mary Poppins sequels!”

In related news, Jonathan Groff, the voice of Kristoff in Frozen, will reprise his Hamilton original cast role as King George for the first three years of the Disney show.

Have you ever signed a contract with Disney? Can you talk about it? Comment below!

January 17, 2019 by Marty in Florida
© 2020 Uncle Walt's Insider. All rights reserved. All images used with permission. Unless otherwise attributed, all images licensed under Creative Commons CC0 license. This site is protected by reCAPTCHA and the Google Privacy Policy and Terms of Service apply.