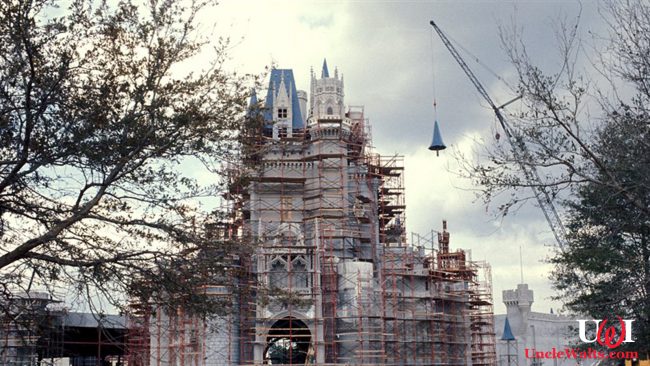 It’s becoming routine for the Castle to be taken down for a hurricane threat.

WALT DISNEY WORLD, FL — Things have begun to return to normal at the empty Walt Disney World Resort and Spa this week as Hurricane Dorian changed course, missing Florida. Within a few days, park officials expect to be letting guests back into the hotels and parks.

Orlando’s most popular tourist destination (after the Holy Land Experience) takes several steps to protect itself against hurricane-force winds. This week Walt Disney World shut down its water park (River Country), took down the haul ropes from the new Skyway (setting back the opening date for that gondola system until 2023). And, as reported by Orlando Weekly, the resort rolled Spaceship Earth into storage and took apart Cinderella Castle.

As the photo above shows, Cinderella Castle is almost completely reassembled. Once the all-clear is given in a few days, Disney will reopen its parks and hotels to guests. So if you were planning on visiting Walt Disney World this week, hang tight — it’ll be back open soon!

What do they do for tsunamis, we wonder? Let us know in the comments below!

Cover photo: Cinderella Castle is almost reassembled after the threat from Hurricane Dorian. Photo by Disney via NBC News.

September 6, 2019 by Marty in Florida
© 2020 Uncle Walt's Insider. All rights reserved. All images used with permission. Unless otherwise attributed, all images licensed under Creative Commons CC0 license. This site is protected by reCAPTCHA and the Google Privacy Policy and Terms of Service apply.