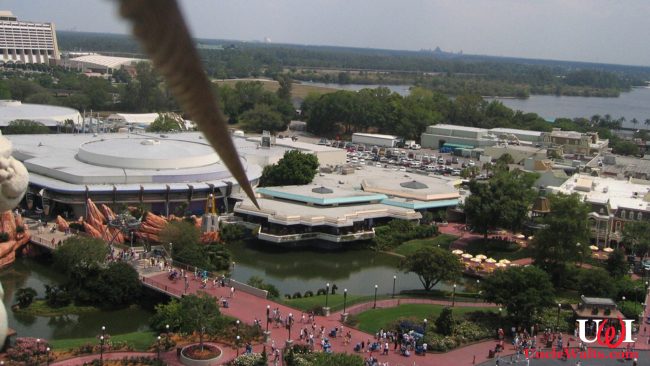 WALT DISNEY WORLD — Many a guest at the Magic Kingdom Park has looked up during the day and spotted a long cable which passes overhead, from the tallest tower of Cinderella Castle towards Tomorrowland. Some have asked cast members about its purpose, and been given answers such as “It’s a leftover telephone cable from when the switchboard was up there” or “That helps the castle not blow over in a hurricane.”

And at night, guests watching the evening fireworks show at the hub look forward to Tinker Bell’s live appearance, as she flies down from the tallest tower of Cinderella Castle towards Tomorrowland. Well, Uncle Walt’s Insider can finally reveal that (SPOILER!!!) the two are connected — Tinker Bell actually slides down that same cable! [Ed.: Really? Wow. I’d have never put that together!]

For an extra fee (automatically charged to their Magic Band, or the Magic Band of someone else nearby), guests will climb stairs to the top of the tower, be strapped into a harness, clipped to the cable, and shoved magically down the line to the landing location atop the old Skyway station in Tomorrowland.

Oddly, the main holdup to opening the attraction has been the name.

“Calling it the ‘Cinderella Castle Zipline Experience’ wasn’t really our first pick,” Disney spokesperson Jun Disney (no relation) tells Uncle Walt’s. “It’s a bit on-the-nose for us. We usually like attraction names that are more whimsical, like ‘Mickey’s Philharmagic,’ ‘Mad Tea Party,’ or ‘Hall of Presidents.’ We kicked around names with ‘Tinker Bell’ in it, but we really didn’t want to spoil the magic for our stupider guests who hadn’t figured out what the cable was for.” [Ed.: Hey.]

“Then we spent, like eight months trying to do a wordplay with Ariel (the mermaid) and ‘aerial.’ But we could never make it work, since she lives underwater. So Cinderella Castle Zipline Experience it is.”

Bookings for the new attraction will begin in June (no relation).

Will you try the zipline? Let us know in the comments below!

Cover photo of the new zipline experience at Magic Kingdom via bigfloridacountry.com.

May 2, 2018 by Marty in Florida
© 2020 Uncle Walt's Insider. All rights reserved. All images used with permission. Unless otherwise attributed, all images licensed under Creative Commons CC0 license. This site is protected by reCAPTCHA and the Google Privacy Policy and Terms of Service apply.