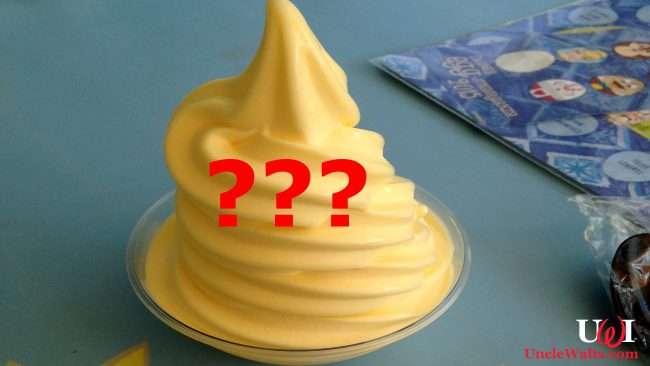 Will our favorite pineapple treat ever be the same again???

The Dole Whip is one of the iconic treats sold at Disney parks. A distant second to the greatest snack ever, the churro (invented by Walt Disney in 1956), the cool, smooth pineapple Dole Whips are nevertheless a guest favorite, far surpassing the inferior cream cheese stuffed pretzel.

Recently, however, the Walt Disney World Resort announced that a change was being made to the beloved Dole Whip — so naturally the internet has exploded with outrage, shock and dismay.

“I bring my family to this place [Disney] for three reasons! First and foremost is for a churro. Second, is for a Dole Whip. Third, I have disposable income. Changing my number two reason is just a slippery slope to taking away reason one. After that, reason three is meaningless.”

“When I was diagnosed as a celiac, I knew the hardest thing I would do since giving birth to triplets would be giving up churros. The Dole Whip became my new best friend, my confident, my everything! Look, I have triplets and I can’t eat gluten and I had to give up drinking. The Dole Whip is really all I have!”

“My husband works for Disney, I don’t want to say where [Ed.: I saw her hugging Frank in custodial.], and he said that he really can’t tell the difference. Well, I can tell! And I’ll tell you what, I don’t like it! I don’t like it one stinking bit! How dare they do this! This cannot stand! I am going to have a talk with the Mayor about this right now!”

“The Dole Whip is just okay. I mean, there are treats that are much, MUCH better, like cream cheese stuffed pretzels. [Ed.: No.] Maybe this is just the thing needed to tip the scales?”

We at Uncle Walt’s Insider, being the cutting-edge reporters we are (and having tons of spare time on our hands), vowed to get to the bottom of this crisis. We can now bring you the full story:

On a recent trip to Disney’s Aulani Resort, Spa, and Campground, a Disney historian learned about the real history of the pineapple. Shockingly, it turns out that pineapples are not native to Hawaii. Instead, the first pineapple was brought to Hawaii by Walt Disney himself after he completed his tour of South America.

Walt Disney, being the innovator that he was, and already enjoying the success of his churro creation, was thinking about how he could incorporate this fruit into something he could enjoy on a hot day at the Studios. While in Hawaii, he met a farmer by the name of James Dole. Walt handed the pineapple to Mr. Dole and asked him to develop some sort of method of enjoying frozen pineapple without chipping a tooth. After a couple of years of research and development, Dole came up with a frozen soft-serve pineapple treat he called the Dole Whip, and history was made. (Dole later had moderate success growing the pineapple on his own plantations, all thanks to Walt Disney.)

So what did change?

We reached out to Disney Food and Beverage manager Hector Renaldo to find out what was changing about the Dole Whip. It turns out that the Dole Whip itself will remain the same! In fact, the only change is that the pineapple’s history on a pamphlet is being corrected to reflect this new information.

Renaldo shares, “We have small pamphlets we hand out if a guest asks for ingredients to determine if they have any allergies. The pamphlets sometimes give a brief history of the food. In this case, we just updated the Dole Whip’s history to reflect that, while all of the ingredients for the Dole Whip are grown in Hawaii, the pineapple actually originated in South America. We now properly credit Walt Disney for bringing the pineapple to Hawaii. As far as the product, nothing has changed at all.”

So that’s it. No change to the Dole Whip itself. Only some wording on a pamphlet.

So is this change worth all of the upset, aggravation, and concern that has been flying around, generating clicks and web hits on news sites like this one? Is it? Of course it is. We at Uncle Walt’s will continue to write about this controversial move so long as it drives traffic to our site. That is our commitment to you, our readers.

If you have any information about this controversy, let us know in the comments below.

April 6, 2018 by Walt in California, Florida
© 2020 Uncle Walt's Insider. All rights reserved. All images used with permission. Unless otherwise attributed, all images licensed under Creative Commons CC0 license. This site is protected by reCAPTCHA and the Google Privacy Policy and Terms of Service apply.