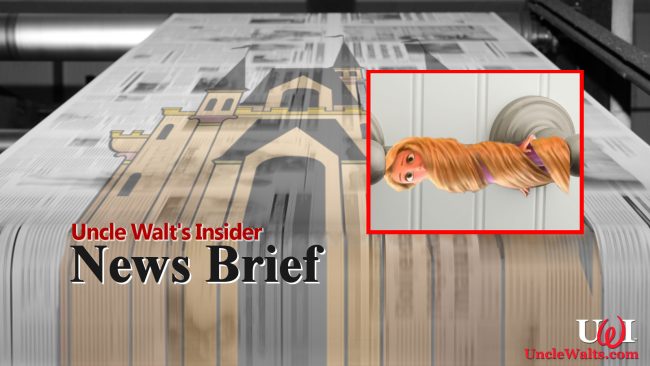 They’ll probably need to drop the “bring back what once was mine” lyric from that song.

ORLANDO, FL — Walt Disney World has announced a new sponsor and brief refurbishment at the Tangled area restrooms. Upon re-opening, guests will find a “plussed” version of paper towel and toilet paper dispensers that dispense a product themed to Rapunzel’s hair. Disney officials have not released any details, but an anonymous custodian, [Ed.: Remove this part, but it was Frank from Ocala, FL again] who is not authorized to speak to media, stated that this is the softest, best-smelling paper he has ever used. He did caution that just like in the movie, you can tell when it’s lost its magical properties because it turns brown. He offered a demonstration, but we quickly declined.

The Walt Disney World marketing team is planning a large campaign around this new change, including television commercials, guest spots on talk shows, a huge social media blitz, and even a cartoon short where Pascal and Maximus have zany adventures trying to get some of the new paper unstuck from one of Maximum’s horse shoes. Look for the new ‘Tangled Restrooms – Sponsored by ultra, Ultra, ULTRA Soft Charmin’ to open soon.

April 5, 2018 by Walt in Florida
© 2020 Uncle Walt's Insider. All rights reserved. All images used with permission. Unless otherwise attributed, all images licensed under Creative Commons CC0 license. This site is protected by reCAPTCHA and the Google Privacy Policy and Terms of Service apply.