Hogwarts Express — the real one — diverts to Magic Kingdom 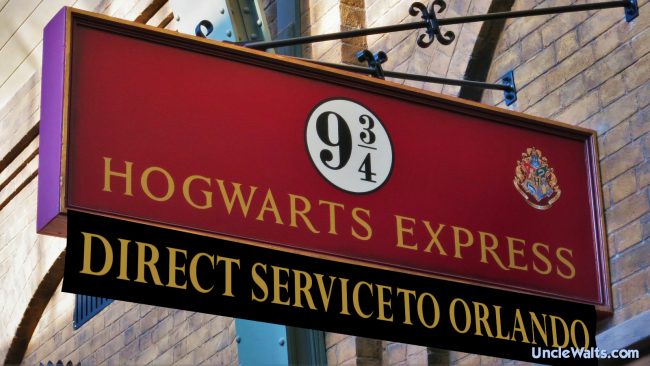 Fans of Universal’s Wizarding World are stunned at the train’s choice of park.

Future wizards who gathered this weekend at London’s King Cross station to board Hogwarts Express from Platform 9-3/4 for their journey to the Hogsmeade Station were in for a surprise. Their journey was short lived, as Hogwarts Express experienced a series of magical malfunctions and was forced to divert for repairs. More surprising, however, was the train’s new destination: not the Wizarding World of Harry Potter at Universal Orlando, but Main Street Station at Walt Disney World Resort’s Magic Kingdom Park.

Generations of young British witches and wizards have boarded the Hogwarts Express to take them from Kings Cross Station in London to Hogsmeade on their journey to a magical education. Many have found it unusual that No-Maj [Ed.: non-magical; Brit.: “muggle”] technology would be used to transport the future wizards; however the train is not just any ordinary 4-6-0 steam engine.

Acquired by the Ministry of Magic in 1830, the Hogwarts Express was quickly converted to run fully on magic. This does not prevent problems from arising, however, which led to this weekend’s events. Uncle Walt’s Insider was there to cover this story you’ll only find here at UncleWalts.com.

Guests and cast members alike were shocked to see an unfamiliar train pulling into Main Street Station on Tuesday. The Lilly Belle was the next Disney train scheduled to arrive, but instead of a 2-6-0 Mogul, the 4-6-0 Hall Class locomotive with its distinctive scarlet paint pulled in.

As cast members quickly radioed for maintenance personnel, as it was apparent something had gone horribly wrong with the train. Another issue also presented itself: what to do with all of the unsupervised, and un-ticketed, students.

Walt Disney World visitor and railfan Theodore Jones talked to Uncle Walt’s Insider about this incident: “Right after the engineer signaled with a single whistle that the train was no longer in motion, the Hogwarts Express conductor quickly hopped onto the platform and explained to the cast members that their engine was having some issues and they thought that the Magic Kingdom would be the perfect place to stop! Boy, were we surprised that they came here instead of Universal!”

As maintenance personnel arrived to address the problems with the locomotive, cast members quickly cleared the station of Magic Kingdom guests to accommodate the stranded students. Despite the lack of theme park admission, Disney also let the students gather in Town Square, with extra churro carts sent in to help feed them. Disney attempted to provide entertainment, but the students were not that impressed with the Disney characters, coming from a world where over-sized animals talk to them all the time. One Hogwarts student did mistake Jake for his own pet, but that was quickly resolved when another student pointed out that Jake was wearing a shirt and hat.

Back at the train, Walt Disney World Railroad (WDWRR) maintenance attempted to troubleshoot the issue, but soon found out that they were in way over their head. While the train looked authentic, the inner-workings were not anything that they were used to working on. The Hogwarts Express magical modifications were beyond their skill level, as they were used to working on real steam engines, not the steam overlays that are popular in other theme parks.

In an ironic twist, the Hogwarts engine needed a wizard. The students were not far along enough in their studies to be of use, and the conductor and driver had not completed their transportation certifications. It was just assumed the train would always work like it had for over 100 years.

But just when it seemed all hope was lost, a familiar face appeared…

Just up Main Street U.S.A. and through Cinderella Castle, Merlin the magician was busy cleaning the sword Excalibur, getting ready to announce a new king for the day. As he looked through the castle hoping to catch a glimpse of the fairy Godmother, he saw a familiar red train off in the distance. He quickly dropped Excalibur and ran off toward his “old friend.”

As luck would have it, Merlin himself was instrumental in converting Hogwarts Express from No-Maj technology to magic. In the intervening years, he found he sorely missed working with the Hogwarts Express, and would often be seen at the WDWRR roundhouse looking over the four locomotives, pining for the days when he would ride the rails.

After reaching the Main Street Station, Merlin was able to quickly diagnose the problem that had stumped the others. And with his wand in hand, and a few words spoken, the Hogwarts Express was fixed better than new.

As students made their way back to the Hogwarts Express, we asked how they enjoyed their stay at the Magic Kingdom. Here are a few responses:

Spencer Allen, Wales – “I thought it would be a bit more…magical. The giant animals did not talk, and the chocolate mouse heads just sat there. Disappointing.”

Mark Blackwood, Scotland – “This is a nice place, I’d much rather visit here than go back to dreary old Hogwarts.”

Shea Coburn, London – “A nice lady handed me a oddly shaped bread item and said it was magical. Turns out it was just a cream cheese stuffed pretzel. Not magical at all, in fact, quite boring.”

Isaiah Beake, Ireland – “Anyone who doubts this is truly a Magic Kingdom has never had a churro! I ate 27, that has to be a record!” [Ed.: No, the record is held by that guy from Plano, Texas]

At press time, attorneys for Universal Parks and Resorts are reported scrutinizing their licensing agreements with Harry Potter author J.K. Rowling to see if any infractions occurred by the wizard train’s visit to a Disney park.

Is the Magic Kingdom truly magical? Let us know, leave your own thoughts below!

March 7, 2018 by Walt in Florida
© 2020 Uncle Walt's Insider. All rights reserved. All images used with permission. Unless otherwise attributed, all images licensed under Creative Commons CC0 license. This site is protected by reCAPTCHA and the Google Privacy Policy and Terms of Service apply.