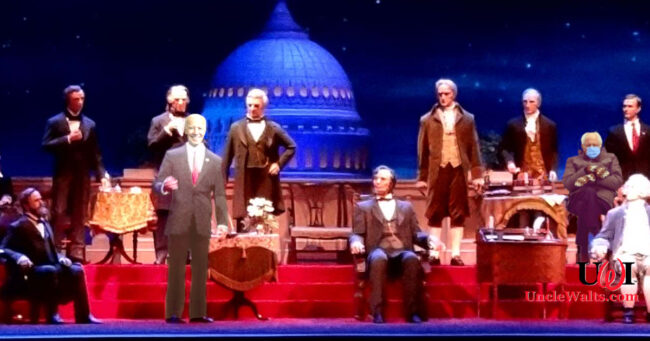 Except one who was using more colorful language. We won’t say who.

WALT DISNEY WORLD, FL — More controversy from the Hall of Presidents at Disney’s Magic Kingdom Theme Park and Spa! Past issues include the Biden animatronic malfunctioning, leaving when questioned, and needing a pants change. And now the Biden animatronic has reportedly become angry and stormed offstage, when the other Presidents began chanting “Let’s Go Brandon” during his prerecorded speech.

So the Hall of Presidents is closed again. We’ll keep you posted on any new developments.

It still wasn’t as bad as when the Kamala animatronic took over for an hour, was it? Let us know in the comments below!

Cover photo: We’re hoping a nap and an ice cream cone will entice him to return. Photo by Kjersti Holmang [CC BY-SA 4.0] via Wikipedia.

December 6, 2021 by Marty in Florida
© 2020 Uncle Walt's Insider. All rights reserved. All images used with permission. Unless otherwise attributed, all images licensed under Creative Commons CC0 license. This site is protected by reCAPTCHA and the Google Privacy Policy and Terms of Service apply.