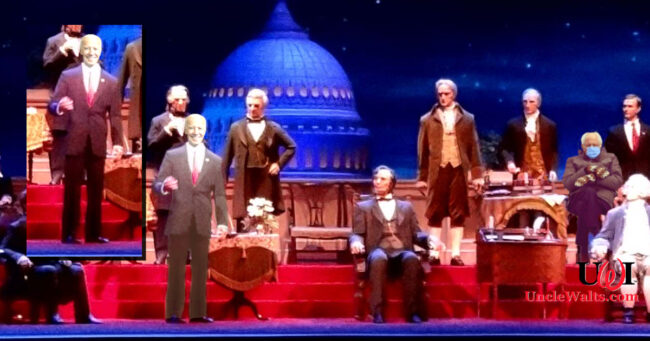 Did he have a meeting with the Animatronic Pope?

MAGIC KINGDOM, FL — The tens of guests flocking to the Hall of Presidents to actually see the presidents, and not escape the heat like the thousands typically do, will notice a change this week!

No, Animatronic President Trump has not re-positioned himself to the front again. The change is that Animatronic Joe Biden is sporting a brand new suit!

Disney (the company) spokesperson Jun Disney (no relation, not Animatronic) filled us in on the change.

Ironically, the new one is suit #2

“As they again turned Animatronic Joe Biden to face the audience (this also needs to be done between shows), they noticed a stain on the pants that he was wearing. We’re told this was an accidental fluid discharge, it can happen to anyone, and we’re not to worry. They quickly replaced his suit and the show went on!”

Rumor is Animatronic Joe Biden asked the cast to remove his pants slowly, yeah, just like that. Would you? Let us know in the comments below!

Cover photo: Before and after the suit change. We’re a bit worried that the lighter color will show, um, “leaks” more easily. Photo by Kjersti Holmang [CC BY-SA 4.0] via Wikipedia.

November 15, 2021 by Walt in Florida
© 2020 Uncle Walt's Insider. All rights reserved. All images used with permission. Unless otherwise attributed, all images licensed under Creative Commons CC0 license. This site is protected by reCAPTCHA and the Google Privacy Policy and Terms of Service apply.