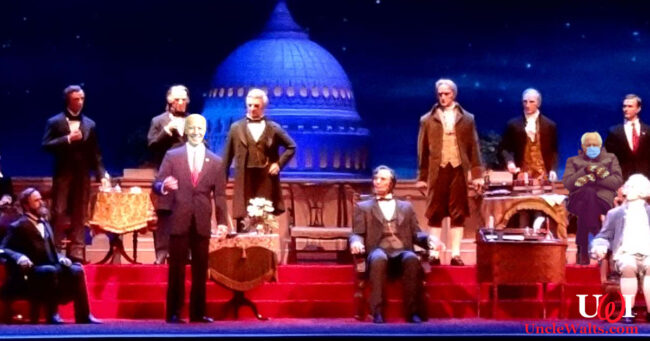 It’s only recently been installed, but it seems to have the same glitches as on the campaign trail.

WALT DISNEY WORLD, FL — The Magic Kingdom Park’s Hall of Presidents attraction is reportedly closed after the animatronic figure of President* Joe Biden began malfunctioning, less than ten days after it was installed.

Reports from insiders say that the figure would randomly say things not in the script, like “salute the Marines” and “I don’t know what I’m signing.” And recently, the figure announced it was “calling a lid” at 9:00 a.m. and refused to function for the remainder of the day.

Waiting in the wings?

Park officials expressed concern off the record [Ed.: Thanks, Jeff!]. “Nine a.m. is way too early to shut down the Hall of Presidents!” said our source. Most guests only go in there for the air conditioning, and everyone knows Florida hasn’t gotten hot by then!”

Meanwhile, other sources report seeing an animatronic of Vice-President* Kamala Harris just offstage. No explanation has been given. Uncle Walt’s Insider will keep you posted on any developments.

Why exactly is the animatronic wearing an earpiece? Comment below!

Cover photo: President* Biden’s animatronic in the Hall of President*s is already malfunctioning. Or is it? Photo by Kjersti Holmang [CC BY-SA 4.0] via Wikipedia.

January 29, 2021 by Marty in Florida
© 2020 Uncle Walt's Insider. All rights reserved. All images used with permission. Unless otherwise attributed, all images licensed under Creative Commons CC0 license. This site is protected by reCAPTCHA and the Google Privacy Policy and Terms of Service apply.