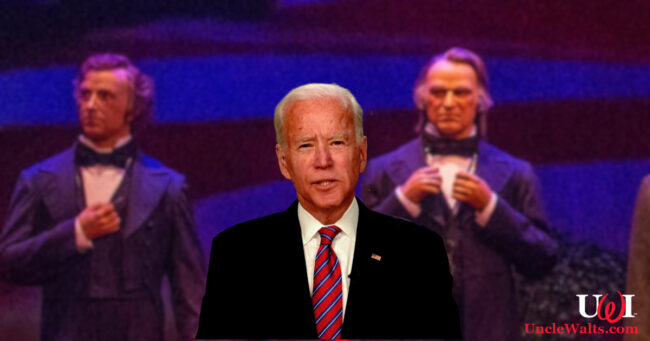 WALT DISNEY WORLD, FL — The Hall of “Presidents”* at Magic Kingdom Park continues to experience problems with the Biden audio-animatronic figure. The figure has caused closures previously due to malfunctions.

Sources tell Uncle Walt’s Insider that an audience member shouted a question about Afghanistan during the program yesterday. The Biden animatronic reportedly replied, “I’m not supposed to take questions,” and then turned and left the stage.

Found but still closed for now

Later an Epcot Cast Member, who wishes to remain anonymous (thanks, Tamir!), said that the fake president (the Disney one) was found in his park. Cast Members noticed a trail of Mickey Bar wrappers and followed it to the China Pavilion. There they found the Biden animatronic talking with the Xi Jinping animatronic and a guest who looked suspiciously like Joint Chiefs of Staff Chairman Mark Milley.

For now, the Hall of “Presidents” remains closed, depriving tens of vacationing guests access to thirty minutes of air conditioning. We will keep you posted with any updates as we make them up.

*Disney websites and literature have recently begun putting the word “presidents” in quote marks when referring to the attraction. We are following the style, even though no announcement has been made of an official name change.

What is your favorite treat to enjoy while betraying your country? Comment below!

Cover photo: The Biden animatronic in the Hall of “Presidents” before it left.

September 20, 2021 by Marty in Florida
© 2020 Uncle Walt's Insider. All rights reserved. All images used with permission. Unless otherwise attributed, all images licensed under Creative Commons CC0 license. This site is protected by reCAPTCHA and the Google Privacy Policy and Terms of Service apply.