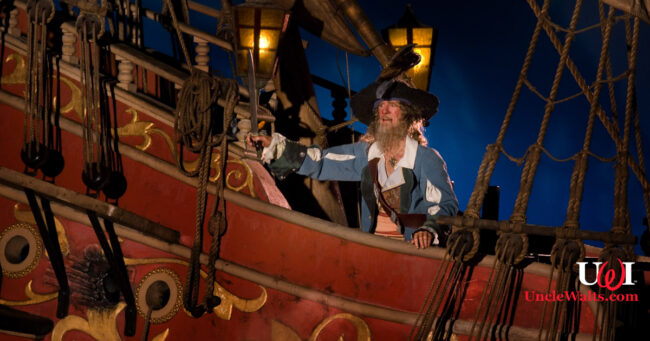 Funny, we’re pretty sure we’ve witnessed this battle scene while floating by in a tiny boat.

DISNEYLAND RESORT, CA — For years and years, Captain Barbossa has waged war against the small village of Puerto Dorado on Isla Tesoro, as witnessed by hundreds of thousands of guests floating by the battle scene in tiny boats. Barbossa was attacking because the village refused to produce Captain Jack Sparrow. Of course, everyone knows Captain Jack Sparrow is nowhere to be found in that attraction.

The demands were met with fierce resistance, with the Wicked Wench (Barbossa’s ship) and the fortress trading cannon fire. As many, many guests can attest, the battle raged for years, but with poorly-aimed shots that mostly impacted the water (next to the tiny boats).

Those defending the island had threatened to sink the ship, and today they were finally able to carry out that threat.

He did not throw away his shot

Last night, however, apparently a single cannon was loaded and aimed properly by an unknown assailant. During ride testing prior to park opening, the cannon fired and fatally struck the Wicked Wench. The ship quickly sank, with all crew members feared lost, including the beloved Captain, Hector Barbossa.

Services for Captain Barbossa are pending. Stay tuned for updates on this breaking news!

Too bad once a character in the Pirates franchise is dead they can’t come back. Am I right? Let us know in the comments below!

Cover photo: This isn’t another death that happened a long time ago that we should have known about, is it? Photo © Disney.

October 29, 2021 by Walt in California
© 2020 Uncle Walt's Insider. All rights reserved. All images used with permission. Unless otherwise attributed, all images licensed under Creative Commons CC0 license. This site is protected by reCAPTCHA and the Google Privacy Policy and Terms of Service apply.