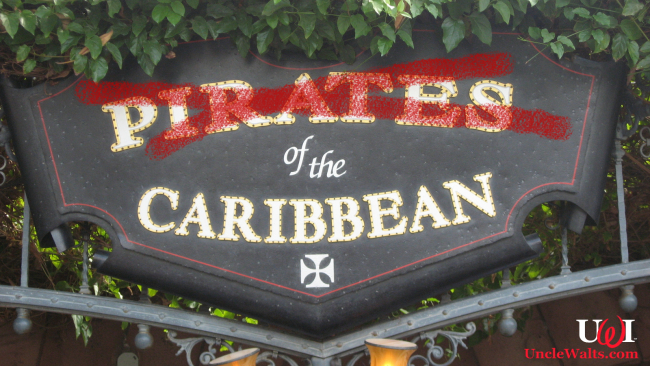 “It’s the obvious next step, given the changes up until now.”

GLENDALE, CA — It is well-known that the current Pirates of the Caribbean rides are different than the original versions. As society has changed and developed certain sensitivities, Disney Imagineers have altered the ride experience to avoid offense. Pirate men first chased the town’s women, then their food, and now the women chase them. The Redhead is no longer up for auction, but is a pirate herself. And as society became less offended by Johnny Depp, he was added to the ride.

Now, as sources within Disney Imagineering and Spa tell Uncle Walt’s Insider, the rides will be changed again.

“It’s the obvious next step,” says Disney (the company) spokesperson Jun Disney (no relation), “especially given the changes up until now. Disney really bends over backwards to avoid offending anyone, which is the reason for how the ride has evolved before.

“Well, many people find the whole idea of pirates and pirating extremely troublesome. It’s high time we recognized that. Plus, we get constant complaints from Somalians that they are not represented in the ride. We’d either need to add them in or take out pirates altogether.”

Disney (no relation) says the ride will be changed “soon,” but no specific schedule has been released.

“It’s the second thing on the to-do list right now,” she says, “right after we remove all references to the occult from Haunted Mansion.”

So will it be called just “Of the Caribbean” now? Comment below!

Cover photo: Something of the Caribbean sign. Photo by Jonnyboyca [CC0] via Wikimedia Commons.

April 3, 2019 by Marty in California, Florida
© 2020 Uncle Walt's Insider. All rights reserved. All images used with permission. Unless otherwise attributed, all images licensed under Creative Commons CC0 license. This site is protected by reCAPTCHA and the Google Privacy Policy and Terms of Service apply.