Hey Walt, now that Galaxy’s Edge is open, what land should Disney build next?

“Hey, Walt, now that Star Wars: Galaxy’s Edge is open, what land should Disney build next?”

Truth be told, there is only one idea that Disney has, and it may surprise you. It certainly surprised me.

The Disney of today is no different. Truth be told, none of the ride themes are that original. The boys back in Imagineering are just ripping off ideas from other creative avenues.

Now, I will admit they excel at coming up with new ride technologies. The steam trains that circle both Disneyland and Magic Kingdom are amazing pieces of technology that birthed Steampunk!

Walt [Ed:. Disney, not Yensid] once said, “Around here, however, we don’t look backwards for very long. We keep moving forward, opening up new doors and doing new things, because we’re curious … and curiosity keeps leading us down new paths.” This is why Disney can just shrug off criticism so easily. This is why, as far as Disney is concerned, Star Wars: Galaxy’s Edge is already yesterday’s news. They are already looking to the future.

See, all of the Cast Members — at least the ones that matter, like C-level, VP-level, certain managers, and of course Team Churro — have already experienced everything that Star Wars: Galaxy’s Edge has to offer. So they are already planning the next big move. Now, what I am going to tell you is going to bring delight to millions of fans across the globe. 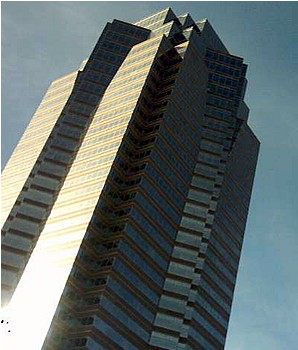 The original Nakatomi Plaza, before it blew up. Photo by Mattes [CC BY-SA 3.0] via Wikimedia Commons.

So here you go: the next land, which will be built at ALL Disney Parks: Nakatomi Plaza!

Made famous from the first Die Hard movie, Nakatomi Plaza is a high-rise office building that Hans Gruber and his band of villains took over during the employee Christmas party, until off-duty NYPD Officer John McClane showed up to save the day!

Bruce Willis is on board to reprise his role as Officer McClane, and Disney plans to use the same guys who made CGI Princess Leia to bring Hans Gruber back to life. Disney will use forced perspective to make the building look like it towers over the rest of the park, when in reality it will be at the standard build limit of 199 feet.

Nakatomi Plaza will house at least one E-Ticket attraction that will take guests through an interactive chase alongside McClane as he hunts down Gruber and his cronies. Imagineers have confirmed that churros will be available throughout the land, and plans are to offer these delicious treats in the queue. Disney is planning on the lines to at least double the demand for Star Wars: Galaxy’s Edge.

Is Die Hard a Christmas movie? Let us know in the comments below!

June 5, 2019 by Walt in WWWD
© 2020 Uncle Walt's Insider. All rights reserved. All images used with permission. Unless otherwise attributed, all images licensed under Creative Commons CC0 license. This site is protected by reCAPTCHA and the Google Privacy Policy and Terms of Service apply.