Bob Iger to write for Uncle Walt’s Insider after retirement 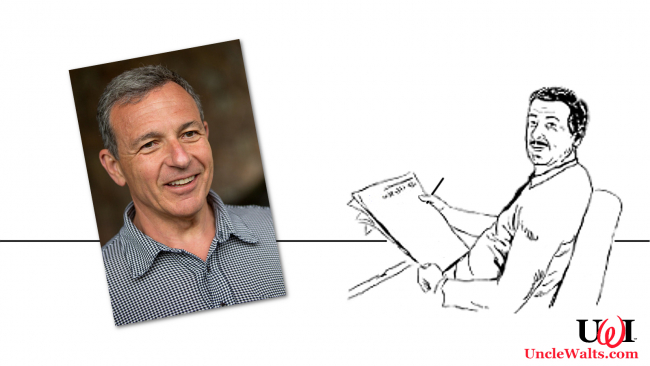 BURBANK, CA — The current CEO of the Walt Disney Company and Spa, Bob “Robert” Iger, is set to step down in the summer of 2021. But don’t think he’s retiring completely! No, we are happy to announce that Iger will be joining the staff of Uncle Walt’s Insider shortly after he leaves Disney.

“We’ve been in negotiations with him for some time,” says Uncle Walt’s Insider’s Founder, Inspiration, and Maintenance Supervisor, Uncle Walt. “And we are excited that we’ve been able to come to an agreement. Of course, it’s been a concern of his about the story leaking out.”

There are a few, uh, provisos, uh, a couple of quid pro quos

Iger’s participation with Uncle Walt’s does come with a few stipulations that we were happy to agree to.

“First,” our Uncle Walt says, “his non-compete clause with Disney means that he will not be directly writing about Disney news and concerns. In fact, we expect to have him write a weekly column focused exclusively on Six Flags parks. But we also expect he will be feeding the rest of us lots of dirt and inside info on the Mouse that we can use for our articles. Of course, we won’t be able to mention that publicly.

“The other requirement is that, like the rest of us, he would write using a pseudonym, and his participation in Uncle Walt’s Insider would be kept an absolute secret. That way, no one would ever know he was involved.

“Marty, why are you writing this down? I’ve told you we absolutely cannot use this in an article!”

Can you please keep this a secret? And let everyone you tell know it’s a secret, too? Thanks!

May 24, 2019 by Marty in Other
© 2020 Uncle Walt's Insider. All rights reserved. All images used with permission. Unless otherwise attributed, all images licensed under Creative Commons CC0 license. This site is protected by reCAPTCHA and the Google Privacy Policy and Terms of Service apply.