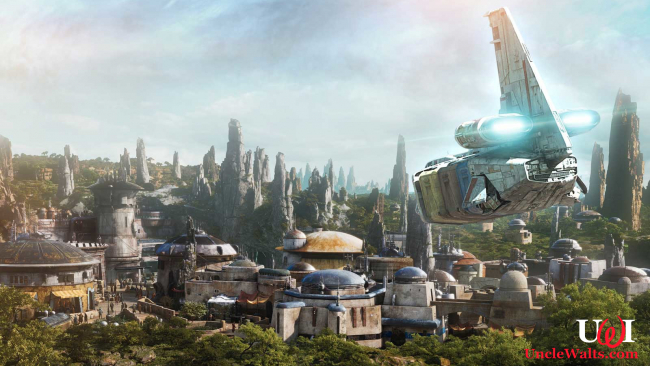 Here’s information we guarantee you won’t find anywhere else!

DISNEYLAND, CA — We are less than one week away from the opening of Star Wars: Galaxy’s Edge at Disneyland, and new details are beginning to leak out. Uncle Walt’s Insider is here to pass along all of these incredible rumors!

Here’s just a few of the things we’ve learned.

Users of the Force can override the reservation system

True, in the initial weeks you need a reservation for a 4-hour window to get into Galaxy’s Edge. Or do you? We’re told that if you walk up to the entrance and tell the Cast Member “You don’t need to see my reservation” while making a casual hand gesture, you will get right in!

You can use a SunPass to enter

Having a SunPass, Florida’s prepaid toll road system, will also get you into Galaxy’s Edge, even without a reservation. You must have your SunPass transponder affixed to your forehead. And oddly, this will only work at Disneyland, not in Florida’s Hollywood Studios.

Wookiees get in for half price

Yes, during the first few months, Disneyland park passes are 50% off for wookiees. But not for humans wearing wookiee costumes — they check. [Ed.: Found that out the hard way!]

The area is not actually based on Star Wars

We’ve searched for minutes on IMDb for a movie called Star Wars: Galaxy’s Edge. Turns out there isn’t one! But there are a whole bunch of other flicks we haven’t seen that have “Star Wars” in their titles. Maybe it’s based on one of those?

Have you heard any other Galaxy’s Edge rumors? Let us know in the comments below!

May 25, 2019 by Marty in California
© 2020 Uncle Walt's Insider. All rights reserved. All images used with permission. Unless otherwise attributed, all images licensed under Creative Commons CC0 license. This site is protected by reCAPTCHA and the Google Privacy Policy and Terms of Service apply.