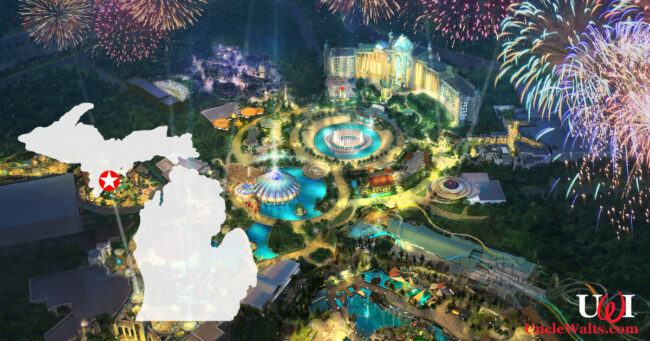 Soon, Escanaba will be just like Orlando! But slightly colder.

ORLANDO, FL — Following an announcement that construction on their new “Epic Universe” theme park had been halted, Universal Orlando hit us with another surprise.

Rather than being the third park [Ed.: Universal claims it would be their fourth, but a warmed-over version of Wet ‘n’ Wild is not a theme park.] in the company’s Florida portfolio, they’ll be building the Epic Universe park just outside of Escanaba, Michigan.

Seriously. They said Escanaba. We caught up with Universal (the company) spokesperson Junie Versal (no relation) for the backstory.

“Well, since Disney is opening a park there, and we like to copy everything they do, we took that as a sign that we really should take a closer look at Escanaba. It turns out that it (Escanaba) is an amazingly scenic town in Michigan’s Upper Peninsula. We went up there, and we were blown away. The warm waters of Lake Michigan, the delicious meat-filled pasties, and the friendly Yowppers that call Northern Michigan home, it all makes sense.” [Ed.: I believe the term is ‘Yoopers’. They’re in the Upper Peninsula. U-P. Yooper.]

Versal (no relation) continued, “And it’s a perfect fit for Universal (the company). And my family. We’re going to have to move up there. I think I’m going to need to buy a winter coat. But, I digress. Sorry. Where was I? Oh yeah.”

“I’m sure you know that we have an annual Beer and Pizza festival. Turns out, there’s lots of great breweries in Michigan. Bell’s Brewery makes some really amazing beer, and we plan to make that the focus of our new Beer and Pizza festival. We also plan on featuring locally delivered, sustainably sourced Pizza. I’ve heard Michigan is actually the Pizza Capital of the U.S. Plus, I hear that seeing Escanaba by the moonlight is amazing!” [Ed.: In da moonlight! Not by the moonlight!]

Uncle Walt’s Insider searched through the property tax records in Delta County, and were unable to find any sales indicating Universal (the company) as a buyer. However, following Disney’s lead, they may have been known to use aliases and fake corporations to complete real estate purchases.

There is no word yet on a potential opening date, but rest assured, Uncle Walt’s Insider will report the news as soon as it happens. Or sooner.

Is Escanaba becoming the new Orlando? Let us know in the comments below!

July 18, 2020 by X in Florida, World
© 2020 Uncle Walt's Insider. All rights reserved. All images used with permission. Unless otherwise attributed, all images licensed under Creative Commons CC0 license. This site is protected by reCAPTCHA and the Google Privacy Policy and Terms of Service apply.