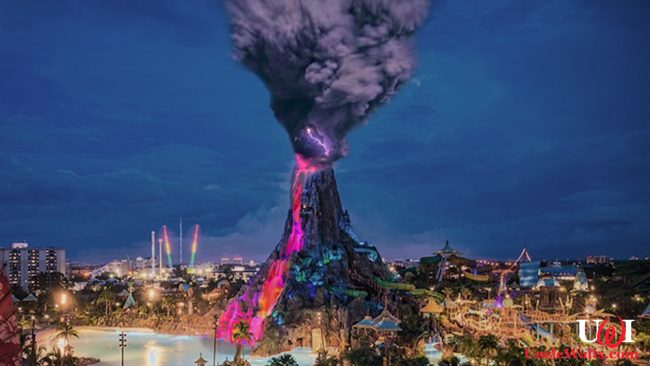 “If the park had been open, who knows how many guests would have died.”

ORLANDO, FL — In what some are calling “a shutdown miracle” (and to be fair, others are calling “fake news”), Volcano Bay erupted on Tuesday.

The volcano is a feature of a water park at the Universal Orlando Studios, Theme Park, School of Witchcraft & Wizardry and Spa. Although it was not thought to be dormant, since it regularly belched smoke, steam and fire, park officials did not previously believed it posed a danger.

Universal (the company) spokesperson Junie Versal (no relation) was stunned.

“Think of the paperwork”

“It’s such a miracle that no guests were there, because of the Chi-…, uh… Wu…. Hmm. The Virus That Shall Not Be Named. If the park had been open, who knows how many guests would have died.”

That would have been tragic, we agreed.

“Oh, no doubt,” Versal (no relation) said. “I mean, just think of the paperwork we’d have to fill out. Besides the environmental impact statements we’ll have to do anyway, there would be incident reports, death certificates, OSHA reports. Plus we’d have to sort out which deaths were caused by the volcano, and which were because of the virus. It’d be endless.

“We’ll be busy enough as it is, just editing our pre-construction studies to cover our butts.”

Do you think Hogsmeade will recover from the tsunami? Let us know in the comments below!

March 25, 2020 by Marty in Florida
© 2020 Uncle Walt's Insider. All rights reserved. All images used with permission. Unless otherwise attributed, all images licensed under Creative Commons CC0 license. This site is protected by reCAPTCHA and the Google Privacy Policy and Terms of Service apply.