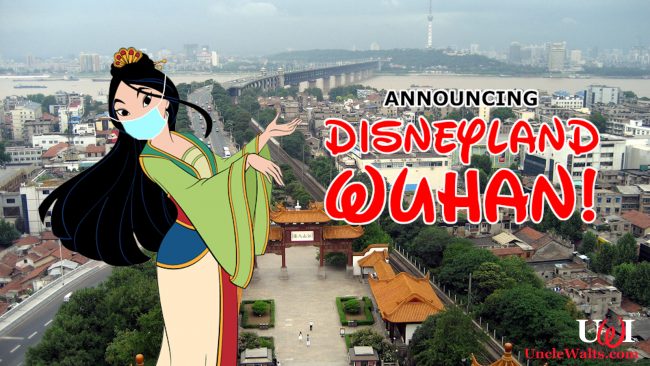 Don’t worry. The WHO has given their okay. (And Led Zeppelin, Pink Floyd, and the Rolling Stones.)

WUHAN, CHINA — Details are unclear at the moment (it’s not easy to get any reliable information out of China) but apparently Disney will soon start construction on their third China-based theme park. Yes, Disneyland Wuhan will soon open its doors to the public!

Once Epcot reopens next February, there will be a new Disneyland Wuhan Preview Center at the China Pavilion in World Showcase. There guests will be able to view a scale model of the park, try new and exotic delicacies at the wet market, and buy Disney-themed protective gear.

Uncle Walts not able to confirm the rumors of a new virus-themed dark ride (with socially-distanced doom buggies) at the China Pavilion. We’ll keep you posted.

Will you try the bat skewers? Let us know in the comments below!

Cover photo: The site of the next Disney park! Photo by risemeagain [CC BY-SA 2.0] via Wikimedia.

April 28, 2020 by Marty in World
© 2020 Uncle Walt's Insider. All rights reserved. All images used with permission. Unless otherwise attributed, all images licensed under Creative Commons CC0 license. This site is protected by reCAPTCHA and the Google Privacy Policy and Terms of Service apply.