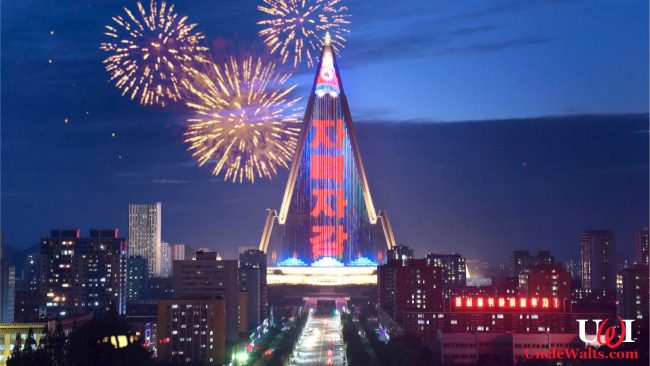 They just do everything right!

PYONGYANG, NORTH KOREA — Amidst global shutdowns of the theme park and entertainment industries, one nation has managed to keep its Disney park operating. In fact, not just operating, but flourishing!

In an article published yesterday, the Korean Central News Agency (KCNA) reported that “His Excellency Marshal Kim Jong Un personally welcomed the five trillionth visitor to Disneyland Pyongyang.” The “glorious meeting” was “a fruition of the wise guidance of the Workers’ Party of Korea and the great military-civilian unity.”

While other countries are fighting the pandemic, North Korea has reported zero cases of the Wuhan flu. The article attributes this to “the fighting mode of the Korean revolution which opened up a new historic turning point in the building of a powerful socialist country. Supreme Leader Kim Jong Un continues to show the way to the rest of the world.”

Disneyland Pyongyang remains the only Disney park open at this time.

UPDATE: Please disregard this. We’ve just learned that the Korean Central News Agency is one of those stupid satirical fake news sites, like CNN. We apologize for any confusion.

Wait, isn’t Bob Iger the Supreme Leader? Let us know in the comments below!

Cover photo: It was either use this stock photo or a clearly photoshopped one of Kim Jong Un shaking hands with Goofy.

May 9, 2020 by Marty in World
© 2020 Uncle Walt's Insider. All rights reserved. All images used with permission. Unless otherwise attributed, all images licensed under Creative Commons CC0 license. This site is protected by reCAPTCHA and the Google Privacy Policy and Terms of Service apply.