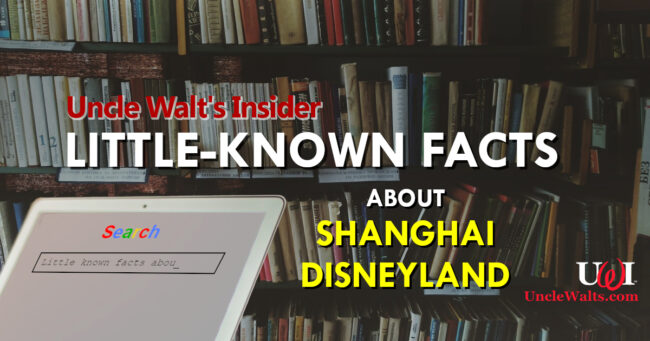 Shanghai Disneyland! It’s like Disneyland, but in Shanghai! All the wonders of China, and all the magic of Disney, neatly packaged in a single park! But do you know everything there is to know about it?

If not, don’t despair! Uncle Walt’s Insider is here to provide some incredible, newly-discovered trivia about Shanghai Disneyland!

The park is named for the famous explorer Dr. Albert Shanghai.

And if you don’t believe that, you are in de-Nile.

Shanghai Disneyland is the only place in the entire world that you can ride Tron Lightcycle Power Run.

At least for a few more months.

It’s one of only four Disneylands located in Communist-controlled regions.

The others being in Pyongyang, Hong Kong, and Anaheim.

You can see the world’s first human audio-animatronic in “Great Moments with Chairman Mao.”

At least, that’s what the brochures say.

This is the only Disney theme park that NBA players are allowed to visit.

Lebron has a summer home nearby.

Neil Degrasse Tyson has no opinions about this park.

We’re worried about him. He usually has opinions about everything.

Fortune cookies are available with all meals for no additional cost.

Shanghai Disneyland recently switched from plastic to paper chopsticks to protect the environment.

If your paper chopstick dissolves, churros can be used as a substitute. If you want to waste a perfectly delicious churro.

As they should be worldwide.

Referring to the berm surrounding the park as “The Great Wall” will get you ejected.

Calling the bathrooms “The Forbidden City” is also forbidden.

Forbidding is subject to approval by the Government who may decide to forbid the forbidding, thus making the thing previously forbidden no longer forbidden.

All subject to change, of course.

In China, the character of Mulan is called “Shirley.”

…for reasons that aren’t explained.

The park’s underground tunnels, the Utilidors, are connected to a nationwide tunnel grid.

…that also allows movement of military equipment and ICBM’s.

Just trust us on this.

The Beatles song ‘Back in the USSR’ was not written about Shanghai Disneyland.

However, Carly Simon’s song ‘You’re So Vain’ may be.

The most authentic Chinese food is found at Epcot’s New Jersey Pavilion.

But if you do try it, the Mushu pork is actually pork, not dragon. Not even tiny, anthropomorphized, Eddie-Murphy-voiced dragon. The Wandering Dragon contains real dragon meat. As for everything else, … let’s just say it’s not chicken.

And finally… All the parts for the other Disneylands worldwide are made there.

Including the Cast Members.

July 7, 2021 by Marty in Spotlight, World
© 2020 Uncle Walt's Insider. All rights reserved. All images used with permission. Unless otherwise attributed, all images licensed under Creative Commons CC0 license. This site is protected by reCAPTCHA and the Google Privacy Policy and Terms of Service apply.