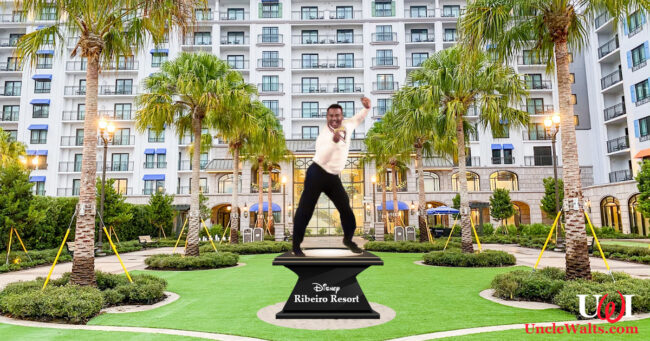 It’s not unusual to be loved by anyone. But it is unusual for our articles.

UNCLE WALT’S H.Q., SVALBARD — We recently received a cryptic email from an anonymous [Ed.: Hi Bob!] source, deep within the Walt Disney Company. The source wrote simply, “You should write an article about Disney’s Ribeiro Resort.”

That was it. The entire email. Not really a lot to go on, but hey, we’re award-winning journalists. We can uncover the rest of the story ourselves. We were able to do some research, and we uncovered three possibilities, all equally plausible.

Unfortunately, when we reached out to our favorite Disney (the company) spokesperson, Jun Disney (no relation), she was out of the office. Furthermore, her voicemail greeting said, “If this is Uncle Walt’s again, don’t bother to leave a message, I’m not going to call you back. I mean it this time.” [Ed.: We weren’t quite sure how to take that. We’ll try her again tomorrow to ask what she means.]

Stuck with a looming press deadline, we did the only thing we could do: make stuff up. We’ve written about each of the three options, and will leave it to you, dear reader, to choose your own adventure.

The first potential interpretation of our cryptic source’s email is that Disney is building a new resort!

Ribeiro is a Portuguese word, meaning “stream”. Since Disney is all about their new-ish streaming service Disney+ right now, we are guessing that this resort would feature wall to wall televisions, with impressive views of, well, whatever you want to watch. [Ed.: Like the Potato Cam?!?]

We also discussed [Ed.: and dismissed] the idea that Disney is planning on building a resort themed to the acting career of Alfonso Ribeiro. We all agreed that wasn’t a terribly exciting theme, and was probably not the correct interpretation. [Ed.: Except for Marty, who does our graphics.]

Walt Disney World, much like Rome, has built a vast network of roads. Directional signage is very important. However, recently, Disney has had some highly publicized sign errors. There was a sign reading “Epoct” and another one for “Amimal Kingdom”.

So it’s possible (likely, even?) that “Disney’s Ribeiro Resort” may just be an error by a sign maker trying to make a sign for Disney’s Riviera Resort, Spa, and Petting Zoo.

Option 3: A(nother) new host for Dancing With The Stars?

This explanation is likely the most plausible.

ABC (a division of The Walt Disney Company) recently replaced long time host Tom Bergeron as the host of Dancing With the Stars. The new host, Tyra Banks, is not doing well. Most of the show’s audience is reportedly already tired of her, only three episodes into her hosting career.

Disney can’t bring back Bergeron, so they’re moving ahead with their last resort, the so called “Ribeiro Resort.” Tyra Banks would be replaced by former DWTS Season 19 winner, Alfonso Ribeiro. Ribeiro is the perfect choice, being familiar with Dancing With the Stars. He is also an experienced host, as he current holds Tom Bergeron’s old spot as the host of America’s Funniest Home Videos.

SO, what do you think, dear reader? Which is the most likely option — or is there another possibility we haven’t thought of?

October 6, 2020 by X in California, Florida, Other
© 2020 Uncle Walt's Insider. All rights reserved. All images used with permission. Unless otherwise attributed, all images licensed under Creative Commons CC0 license. This site is protected by reCAPTCHA and the Google Privacy Policy and Terms of Service apply.