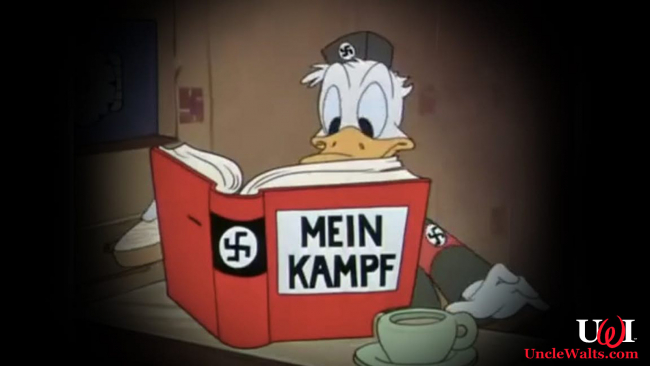 Was it real? A costume party? An old satirical cartoon during wartime?

BURBANK, CA — Supreme Court nominees aren’t the only ones having to deal with allegations of a troubled past. The Walt Disney Company is now scrambling to respond to an uproar caused by photographs of Donald Duck dressed as a Nazi soldier.

“The timing is certainly suspect,” says Disney (the company) spokesperson Jun Disney (no relation). “Just after his uncle Scrooge McDuck becomes the fifth richest person in the world, suddenly these photos ‘mysteriously’ appear. Looks like someone is trying to take the family down. Maybe whoever got passed on the list, hmm, Mark Zuckerberg?”

Disney lawyers are working to uncover the story behind the photographs, while some outside the company are calling for an FBI investigation. None of Disney’s characters have been accused of Nazi sympathies since José Carioca was cleared of charges that he harbored German parrots in Argentina after World War II.

Even if the photo turns out to be innocent, Disney (no relation) admits it isn’t the look the family-oriented company is going for. “We’re going to keep Donald out of sight in the parks for a while until we get this sorted out. We may send out (nephews) Huey, Dewey and Louie instead. Everyone loves those scamps.

“We’ll just have to keep a close watch on them. They have such a mischievous sense of humor — we don’t want them putting on fake Hitler moustaches and goose-stepping around the parks.”

Do you have any incriminating photos of the characters? Comment below!

October 8, 2018 by Marty in Other
© 2020 Uncle Walt's Insider. All rights reserved. All images used with permission. Unless otherwise attributed, all images licensed under Creative Commons CC0 license. This site is protected by reCAPTCHA and the Google Privacy Policy and Terms of Service apply.