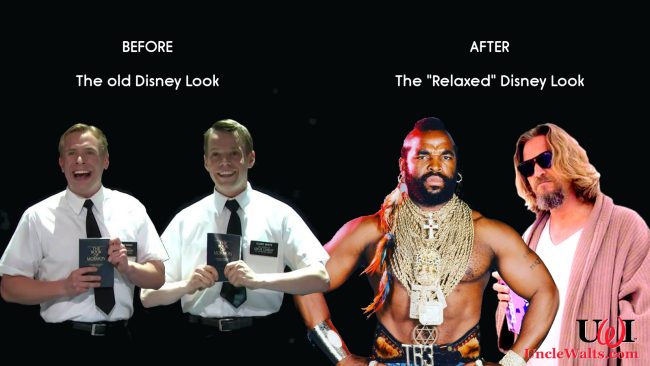 In olden days a glimpse of stocking was looked on as something shocking; now heaven knows, anything goes.

SANTA MONICA, CA — When Walt Disney first opened his beloved park (Disneyland), he mandated that the only mustache allowed in the park be on his face. Cast Member’s hair could be no longer than his, and their uniforms had to match the land in which they worked. Thousands of newly-hired Cast Members were forced to get a shave and a haircut, which in 1955 only cost two bits.

Walt quickly changed this policy to accommodate longer hair for women, but he would still walk the parks measuring the hair of each male Cast Member, as well as checking for stubble (for both men and women). This restrictive, clean-cut standard became known as the “Disney Look.”

Through the years this look has evolved, but now Disney has announced a tectonic shift to their appearance policy. Starting on October 28th, Cast Members will be forced to match the uniform of the executives at Disney HQ, known as the “Relaxed Look.”

While the changes may be controversial, this new policy actually continues what the Disney (the company) executives have been doing for years: that is, slowly dismantling Walt Disney’s legacy.

Bob (Chapek) detailed the changes to the tens of Cast Members in attendance, saying “Disney is always on the forefront of new creative ideas, never, ever repeating ourselves. Our surveys tell us that guests constantly forget that they aren’t in the real world, but seem to be in some sort of fantasy vacation. They think they are in a place where they can visit other planets, step into days past, or even into the future. And they don’t like it. Guest demand for the ‘real-world experience’ is at an all time high. And so today we’re announcing the NEW ‘Disney Look’!

We got the details

Chapek (Bob) provided some specifics of the “relaxed” policy. Henceforth, Cast Members will be required to wear, at minimum, a single necklace AND a bracelet, and any pendant must be minimum of one inch in length. Cast Members no longer have to take time off to grow facial hair, as visible stubble is not only permitted, it is encouraged. Showers are optional as well.

In addition to the relaxed look, relaxed behavior is also encouraged. Cast Members can also forgo common courtesy as they see fit.

Bobpek (Cha) explains, “This new policy also aligns what we’ve been doing for decades in the corporate offices of Disney, and is our way of showing the little people in the company that they matter, kind of. Our own internal surveys have shown that things like Hawaiian Shirt Friday at Disney’s Polynesian Resort is more popular than let’s say, a raise or bonus. So we think our Cast Members will love this new policy!”

Of course there are still limits

In the one explicit exception to the relaxed rules, man buns will continue to be banned not only for Cast Members, but also guests visiting the various Disney Parks, Resorts, Spas, Funeral Homes, and Hospice Centers.

At least one Cast Member is raving about this new policy. Charles “Bob” Newman shared his excitement, “Now I’ll be able to eat two meals a day, instead of spending money on shaving supplies! It’s like getting a raise!”

How many blades do you like in your razor? Let us know in the comments below!

Cover photo: The old Disney look (left) versus the new standards (right). Or is it the other way around? We can’t tell them apart.

October 24, 2019 by Walt in California, Florida, Other
© 2020 Uncle Walt's Insider. All rights reserved. All images used with permission. Unless otherwise attributed, all images licensed under Creative Commons CC0 license. This site is protected by reCAPTCHA and the Google Privacy Policy and Terms of Service apply.