Disney doubles down on death; Hospice coming to WDW 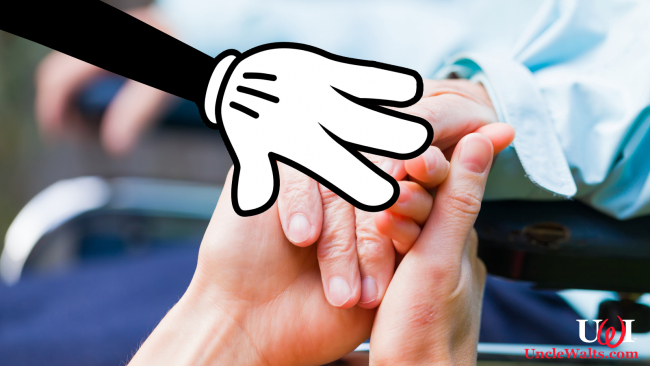 BAY LAKE, FL — There’s been a surge in interest in destination memorial services, with even the Disney Company now putting the “fun” in funerals. With others jumping into the game, the increased competition has caught the eye of Disney officials.

In a hastily prepared press conference [Ed:. Odd… we were the only ones there], Disney (the company) spokesperson Jun Disney (no relation) announced the latest offering. That’s right: Disney’s new hospice (end-of-life) care.

Disney does everything better

Disney (no relation) explained, “After we announced Magical Funerals® and the all-new MyFuneral+ app, we started to wonder if there were other markets we had missed. Data mining from MagicBand technology already showed us an increase in, uh, certain activities. Which has led to a 69% uptick in conceptions that happen (mostly) at our resort hotels. So, we bring families together with our magical weddings, provide space for families to, uh, expand, and let families say goodbye with our magical funerals. What else could we do?

“Today we are proud to announce two new offerings. First, an expanded memorial offering in partnership with Adventures by Disney: Adventure Funerals by Disney! That’s right, we’ll bring Mickey and his pals to help you say goodbye to your loved ones, in some of the most sought-after funeral destinations around the world!

“Second, coming soon to the Walt Disney World Resort, Cemetery, & Spa: Disney Hospice Care. The initial offerings will only be at three resort locations, but will expand to others in the near future. Each care location will have its own identity and range of services.”

Here are the details on the first three locations. They are:

.
Disney (no relation) continues, “Imagine Mickey at Grandma’s bedside, gently stroking her hand as she takes her final breath and passes onto the afterlife. And then she will be greeted by Richard Gerth, who has moved on from greeting guests at the Grand Floridian to greeting guests at our new 5th gate. After she passes, a departed member of Guest Relations will personally take her to meet Walt himself, and then she is booked into her forever home: Disney’s Heavenly Theme Park, Resort, & Spa.”

Disney will start accepting reservations on December 1st through the MyFuneral+ App, the Walt Disney World Website, and through certified Disney Funeral Planners.

Have we gone completely nuts? Let us know in the comments below!

November 20, 2018 by Walt in Florida
© 2020 Uncle Walt's Insider. All rights reserved. All images used with permission. Unless otherwise attributed, all images licensed under Creative Commons CC0 license. This site is protected by reCAPTCHA and the Google Privacy Policy and Terms of Service apply.