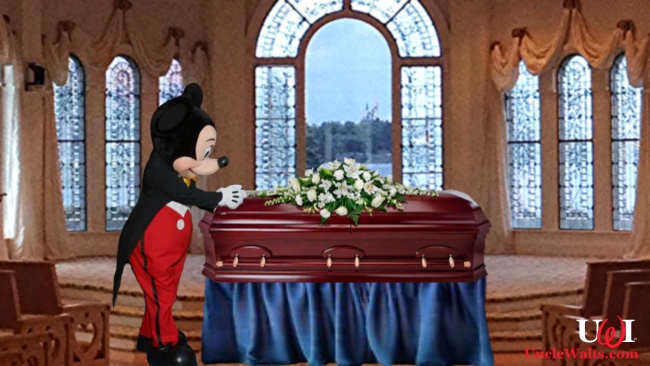 From conceptions to weddings, and now funerals, Disney will take care of you coming or going!

SEVEN SEAS LAGOON, FL — Walt Disney World is not only the top vacation destination in the world, it is also the number one destination for weddings. But with new end-of-life services just announced, it may soon be the premiere spot for “destination funerals”!

Disney has over one hundred Cast Members available to officiate weddings, from all different religious and secular backgrounds (the only exception being Calvinists). Between them, they conduct hundreds of weddings all over Walt Disney World property daily. The joining of two into one family is a happy occasion, and also usually leads to new life being conceived that night.

But recently some obscure newspaper [Ed.: “Newspaper”? They still have those?] reported guest behavior that is counter to these happy weddings. Guests have been bringing cremated remains of their loved ones to the Disney parks and dumping them into canals, on rides, and around their favorite churro carts.

Magic Kingdom guest Mick Jimalny and his wife Sarah recently witnessed one of these impromptu funerals.

“There we was, sharing a turkey leg and a smoke,” Jimalny says, “and this fella pulls out a bag and starts screaming, ‘I’ll miss you mama!’ And poof, next thing we know an entire Brazilian tour group is covered in his mama’s ashes.”

Jimalny adds, “I know it ain’t right to laugh at a funeral, but I did anyway.”

Making magic for all guests — even dead ones

Disney has already responded by giving guests what they want. Starting in early 2019, Disney will be offering new “Magical Funeral®” services at the Funeral Pavilion now under construction, to be located at the Grand Floridian Resort & Spa.

Disney (the company) spokesperson Jun Disney (no relation) was attending the funeral for her beloved cat Hellrazer and was unavailable for comment, but did send us the following text:

UPDATE: Beginning in December, guests will be able to download a new MyFuneral+ app for their smartphones or access the service on Disney’s website! We’ll try it out [Ed.: using Harriet as a test subject?] and let you know what we think!

Would you prefer to have a Disney Wedding or Disney Funeral? Let us know in the comments below!

Cover photo, showing how Mickey will now cry over your dead body, by Chad Sparkes [CC BY 2.0] via Flickr, modified.

November 8, 2018 by Walt in Florida
© 2020 Uncle Walt's Insider. All rights reserved. All images used with permission. Unless otherwise attributed, all images licensed under Creative Commons CC0 license. This site is protected by reCAPTCHA and the Google Privacy Policy and Terms of Service apply.