Chapek haunted by Ghost of Disney Past - Uncle Walt's Insider

Chapek haunted by Ghost of Disney Past 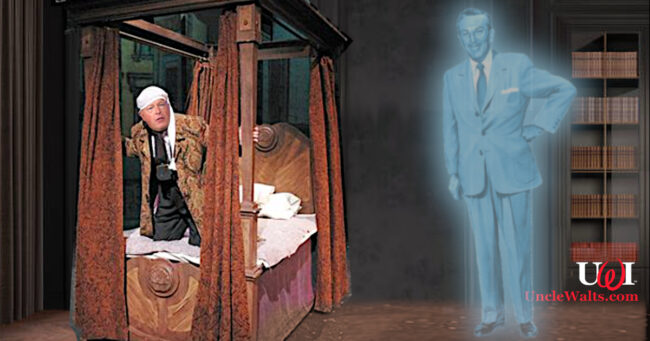 BURBANK, CA — Sources within the Disney Company say that CEO Bob “Bob” Chapek is being visited by the Ghost of Disney Past.

Disney (the company) spokesperson Jun Disney (no relation) confirmed the haunting, but said it is no big deal.

“The ghost first showed up when Chapek started charging for things that used to be free for guests,” Disney (no relation) told Uncle Walt’s Insider. “That was unsettling, sure, but Bob’s pretty used to the visits by now.”

“You learn to ignore it after a while”

Former Disney CEO Michael Eisner shares, “I still remember the day of my first visit from the Ghost of Disney Past. It was the day California Adventure opened.

“The specter of Walt Disney hung in my bedroom moaning, ‘What were you thinking?’ and ‘No roller coasters!’ You learn to ignore it after a while.”

Chapek declined to comment on this article, but Jun Disney (no relation) did tell us that the visits are pretty much nightly now.

“Yeah, at first Ghost Walt would show up about once a month and argue with Bob for hours. Now he’s there constantly, just hanging in the air and scowling at him.”

Is there hope for Chapek to have a change of heart? Let us know in the comments below!

Cover photo: We’re scared of what the Ghost of Disney Future will show.

April 8, 2022 by Marty in Other
© 2020 Uncle Walt's Insider. All rights reserved. All images used with permission. Unless otherwise attributed, all images licensed under Creative Commons CC0 license. This site is protected by reCAPTCHA and the Google Privacy Policy and Terms of Service apply.