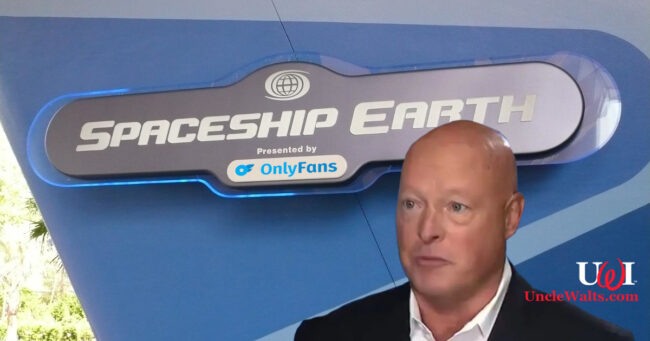 OnlyFans sponsoring Spaceship Earth? It was a step too far.

LAKE BUENA VISTA, FL — In a move that brought tears of joy to Disney fans around the globe, Bob “Bob” Chapek has been fired as CEO of The Walt Disney Company. Reactions ranged from a ticker-tape parade to one Facebook user saying, “So sad to hear about Chapek. I just can’t stop grinning.” But the reason given publicly for his firing (his name being drawn at random from a big lotto tumbler) didn’t quite make sense.

But now the truth can be revealed, for this Uncle Walt’s investigative journalist has discovered the real reason. You may want to sit down. [Ed.: If you’re already seated, move to the floor.]

When the Siemens company abruptly withdrew from Disney after the monorail replacement project fell through, Spaceship Earth was left without any sponsorship. That meant they had no one to make use of their vast VIP area above Project Tomorrow. But then Bob “Bob” Chapek, always someone looking for new ways to milk people [Ed.: of their money], found a new and excited [Ed.: you meant “exciting,” right? Right?] sponsor for Spaceship Earth: OnlyFans, the online service provider “used primarily by sex workers who produce pornography.”

Not exactly a warm reception from stockholders

After several months of Disney being in the news for less than favorable reasons, it turns out that this was the last straw for many stockholders, who did not want to have their at-least-supposedly kid-friendly brand associated with kid-making activities. We spoke with one stockholder, Elphonso Wigglesworth, who was incensed.

“I couldn’t believe it! I did not want my daughter, who is working at Spaceship Earth on the College Program, to be subjected to this,” Wigglesworth told Uncle Walt’s Insider. “Sure, her mother and I told her she was probably conceived when we went for a nap in room 5134 at Contemporary Resort between rides on Space Mountain, but there’s a limit!”

Disney (the company) spokesperson Jun Disney (no relation) seemed glad that the deal had fallen through.

“We love our investors and sponsors. But this situation has proven we need to be pickier in some cases,” Disney (no relation) said. “What really sealed the fate of the deal, and Mr. Paycheck… I mean Chapek, was when we found out that the potential sponsor wanted us to retheme the attraction to how communication and procreation have helped to create the future.

“And they wanted us to move the original ride a bit to the one side, build another identical globe next to it, and rename the attraction ‘Spaceballs: The Ride‘!”

Cover photo: We suspect Bob took the new sign home with him. Photo by Michael Gray [CC BY-SA 2.0] via Wikimedia, & by Disney.

November 25, 2022 by Ub in Florida, Other
© 2020 Uncle Walt's Insider. All rights reserved. All images used with permission. Unless otherwise attributed, all images licensed under Creative Commons CC0 license. This site is protected by reCAPTCHA and the Google Privacy Policy and Terms of Service apply.