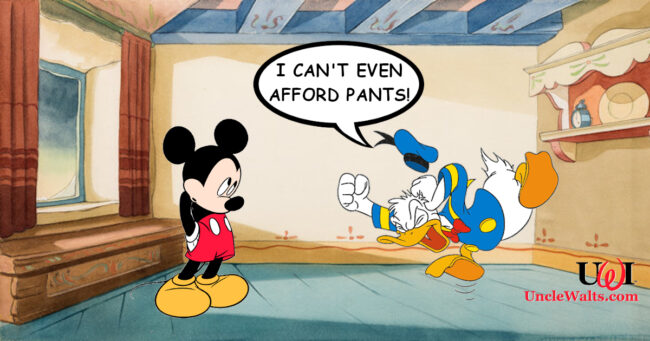 This nickel-and-diming has got to stop.

TOONTOWN, USA — In a statement released today, Donald Duck has announced that he is joining with Mickey Mouse in a push to oust Disney CEO, Bob “Bob” Chapek. We think Donald said, “While the so-called CEO continues to avoid guests and raise prices, one thing that is overlooked is OUR ability to keep up with the rising costs! I get it, guests are here for a few days, maybe a week, and they are able to plan for the costs, but us toons? We’re stuck here! I CAN’T EVEN AFFORD PANTS!”

Mickey Mouse echoed concerns about rising costs, “Oh boy, I wanted to get my pal Pluto a new bone for Valentines Day, and of course I have to get Minnie a gift as well, and Donald and Daisy. Goofy too, then there is Chip and Dale. Clarabelle Cow… But due to the rising costs at the parks, I just can’t afford it. See, while guests are paying for things like Lightning Lane to get into an attraction, we are forced to buy a Backstage Lightning Lane pass if we want to get through costuming, catering, parking, bus line, and the bathroom! There is even a Lightning Lane to go on-stage! It’s outrageous! AND DONALD CAN’T EVEN AFFORD PANTS!”

Uncle Walt’s Insider reached out to Goofy for comment, but he just stared at us and then walked away, tear streaming down from his eye.

Are you able to survive with the rising costs at the Disney Parks? Let us know in the comments below!

Cover photo: In case you missed it, DONALD CAN’T EVEN AFFORD PANTS. Photo by Disney, and various clip art libraries.

February 10, 2022 by Walt in Other
© 2020 Uncle Walt's Insider. All rights reserved. All images used with permission. Unless otherwise attributed, all images licensed under Creative Commons CC0 license. This site is protected by reCAPTCHA and the Google Privacy Policy and Terms of Service apply.