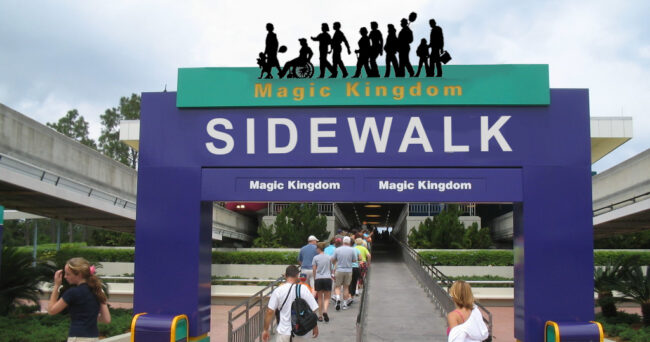 No handrails planned for now; Disney plans to “wait and see if they’re needed.”

WALT DISNEY WORLD, FL — It’s no secret that the Walt Disney World Monorail system is in dire need of an upgrade. However, with the Covid-19 closures, Disney’s ability to spend money on projects has greatly declined. Many projects have been delayed or modified to match projected budgets.

One such project is the replacement of the Monorail fleet.

The Monorail transportation system, while popular, is expensive for Disney to operate. Although guests come from all over the world just to ride it, it costs an estimated $400 billion dollars per train each year to maintain and operate.

During the phased re-opening of Walt Disney World, Disney is saving an estimated $11.7 Billion each day just by not running the Epcot Monorail line. As the bean counters look to save as many beans [Ed.: and dollars] as possible, there is only one solution that makes sense and is within budget.

Disney now says they will replace the entire Walt Disney World Monorail system with elevated sidewalks. The infrastructure is already in place for the supports and power. All Disney will have to do is install the decking for guests to walk on.

Initial plans filed with the Reedy Creek Improvement District show that while the Resort and Express loops will just be lighted paths with benches and trash cans, the Epcot loop will have the addition of restrooms, water bottle fillers, and drink/snack stands. A covered version did show up in initial planning, but the filed version is uncovered, leaving guests to enjoy the beautiful summer Orlando weather.

Disney’s monorail-to-sidewalk plan matches their previously-announced plan to replace resort buses with sidewalks, and Disneyland’s “green” move to replace monorail trains with handcars. Uncle Walt’s Insider will of course keep you informed if they decided to replace anything else with sidewalks, such as the Magic Kingdom train, the Mark Twain steamboat, or Bob Chapek.

Should we buy new shoes with all of the walking we’ll be doing? Let us know in the comments below!

Cover photo: New signage for the Express Sidewalk to the Magic Kingdom. Photo by M. Minderhoud [CC BY-SA 3.0] via Wikimedia.

September 27, 2020 by Walt in Florida
© 2020 Uncle Walt's Insider. All rights reserved. All images used with permission. Unless otherwise attributed, all images licensed under Creative Commons CC0 license. This site is protected by reCAPTCHA and the Google Privacy Policy and Terms of Service apply.