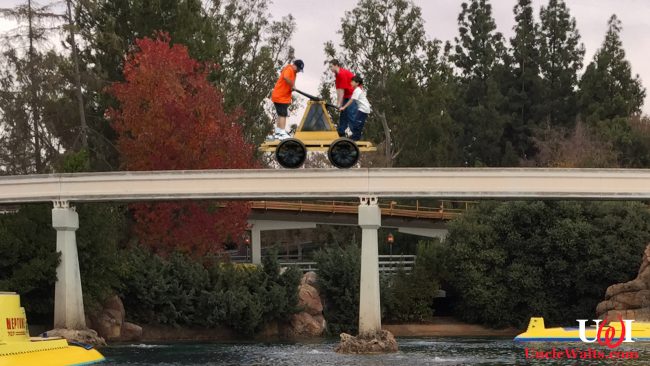 “With California shutting down electrical power, it’s the natural next step.”

ANAHEIM, CA — In a sign of the times, Disneyland is replacing its entire monorail fleet with guest-powered handcars. This signals a move away from environmentally suspect (and unreliable) sources of energy, such as electricity, to renewable sources like people.

“Handcars need no electrical power or fossil fuels. So with California shutting down electrical power, it’s the natural next step. After all, we don’t have the option to build a nuclear power plant like Walt Disney World did.”

Disney (no relation) reports that Disneyland Resort as a whole will be moving away from any “non-biological” sources of power.

“We’ll keep the horse-drawn trolleys on Main Street,” Disney (no relation) shares. “But over the next few years you’ll see us phasing out lots of other things we take for granted now, like gas-powered vehicles, electric lights, boat rides that you don’t row yourself, that sort of thing. The final scene of Fantasmic will probably play out on the canoes instead of that polluting paddle-wheeler.

“Oh, and I know we just built a new parking garage, but I expect we’ll be shutting it and the other lots and garages down completely. We want to encourage folks to walk to Disneyland — it’s just better for our future! Plus we’ll need the space to care for all of the animals that’ll be powering our attractions.”

Will this mean all of the park will be like the turn of the last century, instead of just Main Street? Comment below!

November 22, 2019 by Marty in California
© 2020 Uncle Walt's Insider. All rights reserved. All images used with permission. Unless otherwise attributed, all images licensed under Creative Commons CC0 license. This site is protected by reCAPTCHA and the Google Privacy Policy and Terms of Service apply.