Our Uncle Walt is at Walt Disney World — but no one else is! This is the third installment of Walt’s trip report from inside the (closed) gates.

DISNEY’S HOLLYWOOD STUDIOS, FL — Hi loyal readers, thanks for asking. By now you’ve probably received a communication in the post that states that all Disney parks are shut down indefinitely. The most frequent question we continue to receive during this time is, “What are the parks like during a shutdown?” 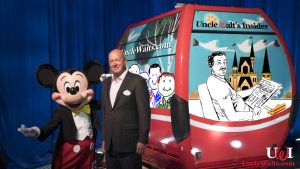 I am still isolating myself at Walt Disney World, as it is still the best place to get away from the crowds. In my last installment, you may recall I was leaving EPCOT late at night, and there was a chance I would miss the last Skyliner. Well, fear not, the amazing Cast Members not only held up the line for me, but they also had my car, which you may recall seeing at a press conference with the Bobs, waiting for me.

I made it back to my suite safely, and rested up for my next adventure to Disney’s Hollywood Studios!

I present you my un-edited notes from the field:

Un-edited notes from the field (edited)

I arrived at MGM, errr, Disney’s Hollywood Studios prior to the park opening. In order to get a boarding group for Rise of the Resistance, you have to get there before the park opens so you’re inside the gates. Boarding groups are usually gone in a matter of minutes.

After I made it past the entry, I decided to queue up for Mickey and Minnie’s Runaway Railway. I passed the time by calling the boys back at HQ and hanging up on them when they answered the phone. It was great fun for me. [Ed.: Ha. As if we ever answer the phones.] As soon as the park officially opened, I went to get my boarding group and ended up with boarding group 57, the first of the backup groups, so it was a good sign!

The Cast Members at Runaway Railway recognized me, so they let me ride a few times so I could get some amazing on-ride video and pictures, which you can see next to the comments section below. Let me know your favorites!

The oldies but goodies

I went to the Indiana Jones Stunt show. It was the same show, and I still was not picked to go on stage. I really think that director has it out for me since I fired him from my movie years ago.

I hit up Star Tours, but never actually went anywhere. I ended up talking to C3PO the entire time. Turns out he is an avid golfer, and I hate golf, so we discussed quantum physics instead. Haha, just kidding, we talked about our hatred for Jar Jar Binks. Wow, that droid can really go on a long winded rant! His break time was coming up, so I headed off to the Jedi Training. It turned into a 45-minute counseling session. I really think Kylo is going to be okay.

I went to the Muppets 3D show, I have no idea what happened, but I lost 20 minutes of my life.

It was finally Fastpass time! Ha ha, who am I kidding, I’m Uncle Walt, it’s always Fastpass time. I headed over to Tower of Terror, great ride overall, but it has its ups and downs. [Ed.: Really? Sigh.]

When exiting Tower, I ran into my old friend, Steven Tyler of Aerosmith. He was between pre-shows, so we caught up. The surgeon did a great job and you can barely see the scar on his finger! He offered to get me onto the ride through backstage, which of course I did. Another great ride, crappy soundtrack. Don’t tell Steven!

I headed over to Toy Story Land, but it was closed for cleaning. Based on what I could see, and smell, Buster got into Andy’s Backyard. Let’s just say it took more than a boom and dustpan. Think commercial front end loader and dump truck.

I decided it was time for some day drinking, and no better place to pre-game than Baseline! Since things were slow, they let me go into the Sci-fi Dine-In Theater Restaurant and enjoy my beverages. They were showing the new Pixar film, Onward. Great film, loved my cameo.

I looked at my watch, Mickey waved, I waved, and then he said, “Oh no, you’re going to miss your Oga’s Cantina reservation!” So I took one of the cars over to the entrance of Star Wars: Galaxy’s Edge.

Wow, this place is amazing! But it was deserted. Just a reminder that the parks are shut down. It was never empty before.

As I walked these empty streets, I saw movement out of the corner of my eye. There was a very large, hairy creature. Finally, I found Bigfoot! Alas, it was just Chewbacca hiding from some Stormtroopers who suddenly showed up. They were playing a game of hide and seek.

Not one for those types of shenanigans, I decided to hit up Oga’s. I found my missing mates from the Rose and Crown Pub! We all had a laugh, drank a few pints, but then a familiar Wookiee tapped me on the shoulder. I followed him outside where he led to me THE Millennium Falcon!

That’s right kids, your own Uncle Walt got to pilot the Falcon with Chewbacca himself! We did a few rounds in the cockpit, ignoring the original mission of course. Chewie punched in the coordinates for Kashyyyk, his homeworld. I showed him Svalbard. It was amazing!

After we said our goodbyes, my phone buzzed. It was time to Rise!

Man, what a great experience! Dueling lightsaber battles between Obi-wan and Darth Vader, swimming in sludge with a dianoga, the trash compactor monster! Flying a tie fighter! Eating a churro!

Alas, it was closing time. I walked down an empty Hollywood Blvd, with just a few (27 to be exact) Security Cast Members keeping a safe distance behind me, I went back to my suite. One more day, one more park, then isolation. For how long? No one knows. I will worry about that another day, for soon I will go on a wild adventure.

Till next time true believers!

Do you think Chewbacca gets mistaken for Bigfoot very often? Let us know in the comments below!

April 11, 2020 by Walt in Florida, WWWD
© 2020 Uncle Walt's Insider. All rights reserved. All images used with permission. Unless otherwise attributed, all images licensed under Creative Commons CC0 license. This site is protected by reCAPTCHA and the Google Privacy Policy and Terms of Service apply.