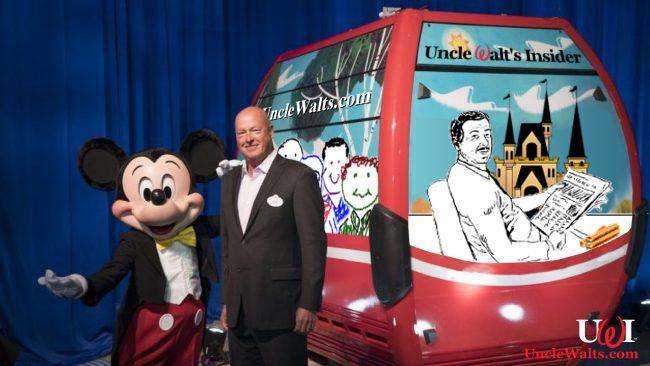 The new Uncle Walt’s Insider Skyliner gondola is the most popular one, naturally.

REEDY CREEK, FL — It’s been a long time in coming, especially since Uncle Walt’s Insider was founded over 80 years ago. But the Disney Company is finally honoring our humble website with it’s own Skyliner gondola car!

Finally, the recognition we deserve

At a special ceremony yesterday, Mickey Mouse and Bob “Robert” Chapek, chair of Disney Parks, Experiences, Consumer Products, and Spas, unveiled the all-new Uncle Walt’s wrap on one of the famous new gondolas. The car features our website artwork of Uncle Walt with a churro, and our entire team of writers, depicted as having just eaten churros.

(Uncle Walt’s team members were not actually in attendance at the ceremony, because of the restraining order.)

“We were going to roll out a gondola featuring a cream cheese pretzel as well,” said Disney (the company) spokesperson Jun Disney (no relation). “The problem was that every time we put it out on the line, guests would constantly throw things at it. So we retired it. I think it’s out behind The Land with one of the old submarines from 20,000 Leagues if anyone wants it. Otherwise, we really should bury it with the Mark IV Monorails next week.”

The Disney Skyliner Gondola and Foot Rub service opened to guests on September 29. To date, only a few people have suffered heatstroke, although four guests have suffered frostbite from the onboard air conditioning systems. Disney (no relation) tells Uncle Walt’s Insider that this is well within expected parameters.

Cast Member Chris from Orlando tells Uncle Walt’s Insider that because there is only one UWI gondola on the Skyliner system, guests clamoring to ride it have created a serious backup. “For instance, this morning, I was working at the Pop Century station. The [Uncle Walt’s Insider] gondola wasn’t even on our line, but I had a line of people waiting anyway.”

“I want to dispel a rumor,” says Disney (no relation). “People have asked me repeatedly if the Uncle Walt’s Insider gondola really travels faster than all the rest. That is absolutely not true, though we are looking into building passing cables.”

“When I first took the picture, I couldn’t believe it,” says anonymous UWI fan Dr. Antonio C. McKey. “I was just standing there at Epcot, and I saw Uncle Walt fly over, so I had to take a picture.”

Guests we surveyed found the Uncle Walt’s Insider gondola to be the best-looking one on the entire system. We just had to weed out the overwhelming number of people who had never heard of Uncle Walt’s Insider. [Ed.: See? I told you we need to up the ad spend, Walt. Just remember to delete this comment before you send it out. – Ub]

“We hadn’t originally planned on an Uncle Walt’s Insider gondola wrap,” said Disney (not related). “But then we realized it was the only way we could think of to get you guys to stop badgering us about it.”

Looking Toward the Future

Disney expects the Skyliner system to be able to transport up to 4,500 guests per hour during peak operation. The Uncle Walt’s Insider gondola will still only be able to transport up to ten guests at a time. If the service performs the way they hope, Disney expects to begin double loading up to 8,900 guests per hour onto the gondolas after they replace the testing cables.

Will you take a ride on the Uncle Walt’s Insider Gondola? Let us know in the comments below!

October 4, 2019 by Ub in Florida
© 2020 Uncle Walt's Insider. All rights reserved. All images used with permission. Unless otherwise attributed, all images licensed under Creative Commons CC0 license. This site is protected by reCAPTCHA and the Google Privacy Policy and Terms of Service apply.