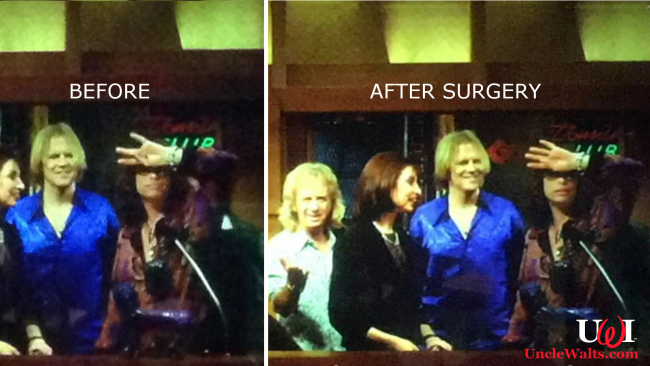 Losing his finger was a real shocker.

Each and every day Steven Tyler and the rest of Aerosmith shock thousands of guests as they are welcomed, by the band themselves, to the Rock ‘n’ Roller Coaster attraction at Disney’s Hollywood Studios. (Rock ‘n’ Roller Coaster, as you may recall, was only built after the plans for a Newsies-based ride fell through.) And for the first 17 years the band faithfully repeated their lines, stood on their exact markers, and used the same gestures for each and every guest.

Eagle-eyed guests, however, noticed something was missing. A freak accident had taken part of Steven Tyler’s ring finger.

Tyler shared with our reporter the back story, “I was trying to put one of those nasty cream cheese filled pretzels down the garbage disposal, when my ring slipped off. I went to retrieve it, and my finger got sliced off. It flew out as I pulled back my hand, a perfect slice. I put the finger into the freezer, slapped on a band-aid, and started our gig welcoming guests.

“I think the real shocker here is the cover band that has been touring on our behalf while we worked the theme park. Those guys are better than we are, and no one has noticed or put two and two together. It’s like how can I go see Mickey Mouse, and then walk out to see him on a parade float immediately? Yeah… the magic is real.”

“Couldn’t put his finger on it”

Not wanting to disappoint the guests, Tyler dutifully went about his day, but something was wrong.

“I just really felt something was absent in my life,” Tyler said. ” I wasn’t complete, whole. For 17 years part of me was missing. I just couldn’t put my finger on it. Then it came to me during a late night ice cream craving. I was tucking into some Blue Bell Cookie Two Step, my go-to when I don’t have any churros in hand, and I found my ring behind some chicken breasts and a frozen pizza. Then I remembered that I also had a finger in there somewhere as well. I had slipped it into a package of hot dogs I had in the freezer. In hindsight, yeah, that wasn’t a good idea, and could have gone horribly wrong.”

Dude looks like a lady, with all ten fingers

Always the showman, and not wanting to disappoint his fans, Tyler arranged to have the finger reattached overnight so he could be with his band-mates the next morning for the first group of guests looking to make it to the Aerosmith concert (and maybe, just maybe, with some backstage passes thrown in).

Rock ‘n’ Roller Coaster and Aerosmith super-fan Jane, from Madison, WI, was there when the finger returned. “I was just so happy to see it again. I am in an all-girl Aerosmith cover band called [Ed.: We can’t print the name of the band here, but it contains the words “pink” and “stink“]. We’re playing the Mall of America on September 15th, you should check it out. Anyway, I couldn’t wait to tell the girls that Steven Tyler was whole again!

“My parents are also going to be so happy that I can get my finger re-attached as well!”

This story is a real shocker! Do you agree? Let us know in the comments below!

August 6, 2019 by Walt in Florida
© 2020 Uncle Walt's Insider. All rights reserved. All images used with permission. Unless otherwise attributed, all images licensed under Creative Commons CC0 license. This site is protected by reCAPTCHA and the Google Privacy Policy and Terms of Service apply.