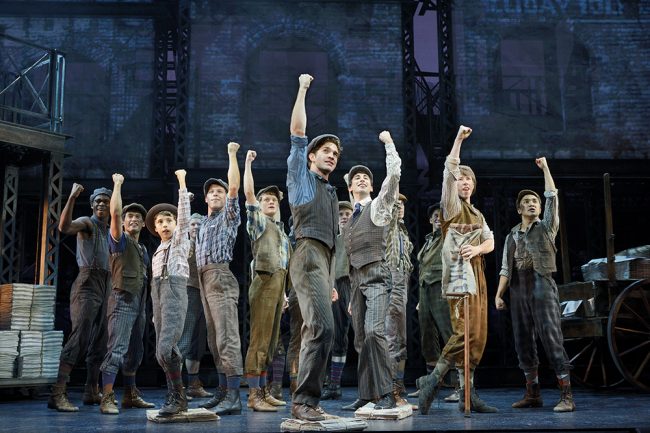 The Seven Dwarfs Mine Train at Disney’s Magic Kingdom Park in Florida is an unqualified success, remaining tremendously popular and generating lengthy standby queues almost four years after its debut. But until now, only a select few people knew that Mine Train’s unique roller coaster / dark ride combination was not original, but was based on an unbuilt attraction originally planned for Disney’s Hollywood Studios: Seize the Day: The Ride.

Soon after the release of its 1992 musical Newsies, starring a pre-Batman Christian Bale, Disney executives started looking for ways to incorporate the hit film into its theme parks. Disney’s Hollywood Studios (then named Disney-MGM Studios) seemed a natural fit. While a live stage show would have been the logical choice, the Studios’ theaters were all in use with successful productions such as Beauty and the Beast – Live on Stage and The Monster Sound Show. Imagineers famously even considered incorporating Newsies characters and storylines into the Indiana Jones Stunt Spectacular.

In the end, though, the desire to add a thrill ride to a park sorely in need of excitement carried the day, and Imagineers began designing a roller coaster based on the film.

While the attraction designed for Newsies at the Disney-MGM Studios didn’t incorporate every feature found on the Seven Dwarfs Mine Train — no swinging ride cars, for example — it did start with a roller coaster, then slow down to pass through an indoor dark ride section themed to the streets of New York City, filled with singing, dancing animatronic newsboys. The soundtrack to the ride would heavily feature the only recognizable song from the film, “Seize the Day.”

The ride would have been located on the then-new Sunset Boulevard area of the Studios, next to Tower of Terror, in the spot now filled by Rock ‘n’ Roller Coaster starring Aerosmith. The whole project fell through, however, when Christian Bale refused to license the use of his image for the ride. Bale, who at the time had just begun recording the voice of “Thomas” for Disney’s 1995 animated release Pocahontas, cited concerns about becoming too identified with the Disney company.

Although the ride was never built, Disney Imagineers who worked on the project put a tribute to it on Rock ‘n’ Roller Coaster. The next time you find yourself on Sunset Boulevard to take a ride in that stretch limo after touring G-Force Records, look back after you pass through the “O” in the “HOLLYWOOD” sign — if you’re looking in the right spot, you’ll see a strobe that briefly lights up the front page of a New York World newspaper with the headline, “Seize the Day”!

Would “Seize the Day: The Ride” have been better than Rock ‘n’ Roller Coaster?
Let us know what you think!

Cover photo by California Musical Theatre, used under Creative Commons Attribution-NonCommercial-NoDerivs 2.0 Generic (CC BY-NC-ND 2.0). No, it’s not from the movie.

January 10, 2018 by Marty in Spotlight
© 2020 Uncle Walt's Insider. All rights reserved. All images used with permission. Unless otherwise attributed, all images licensed under Creative Commons CC0 license. This site is protected by reCAPTCHA and the Google Privacy Policy and Terms of Service apply.