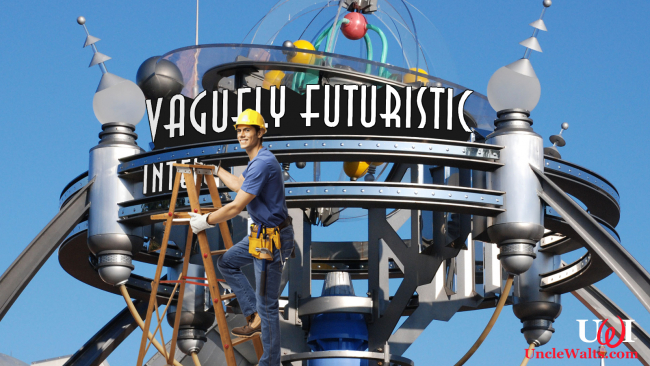 MAGIC KINGDOM, FL — Eagle-eyed guests have noticed that Disney has removed the Tomorrowland sign from the entrance to Tomorrowland at Disney’s Magic Kingdom, Resort, Spa & Amish Retreat Center. Unfortunately, Disney blogs, vlogs, and clogs are all spreading the same fake news, that a new Tomorrowland sign will be coming soon. They are all wrong.

Only Uncle Walt’s Insider will bring you the truth, the whole truth, and nothing but the truth. [Ed. Help us, God!]

A recent trip to a local Orlando area Walmart gave famed epic (and possibly alien) earring-wearing Disney Imagineer Joe Rohde [Ed: We love you, Joe! Squeeeeee! — Marty] a flash of insight. There were incredible technologies on display (smart TVs! Playstation 4! Phones that don’t plug into a wall!). He noted the clear and precise lines of the aisles, and the complete lack of cream cheese pretzel vendors.

As Mr. Rohde munched on a churro sample offered for free by a vendor in the frozen foods section, he began to realize that Tomorrowland was an antiquated thing of the past.

The end of Tomorrowland

Mr. Rohde rode home in his self-driving Tesla – a car more futuristic than anything actually at Tomorrowland – and then quickly hit the drawing board

After asking his wife why the drawing board was in the middle of the hallway, he sat down with a bag of ice and started to dictate a note into his phone, which then his phone translated to text. “Amazing!!!” he exclaimed, as his phone also changed that to text.

It was at that moment that both Joe Rohde and his earring decided that the name “Tomorrowland” was history.

Mr. Rohde and the rest of the Imagineers have kept the new land’s name under wraps. However, we’re Uncle Walt’s Insider, and you don’t get a name like Uncle Walt’s Insider without having some insiders at Uncle Walt’s (the Disney Uncle Walt), so we’re proud to announce the newest land coming to the Magic Kingdom – Vaguely Futuristic Intellectual Property Land! It reminds us of our favorite Joe Rohde quote (uttered in a completely different context), “Not short, but accurate!”

We can’t wait to visit VFIPL! Can you? Let us know in the comments below!

July 13, 2019 by Walt in Florida
© 2020 Uncle Walt's Insider. All rights reserved. All images used with permission. Unless otherwise attributed, all images licensed under Creative Commons CC0 license. This site is protected by reCAPTCHA and the Google Privacy Policy and Terms of Service apply.