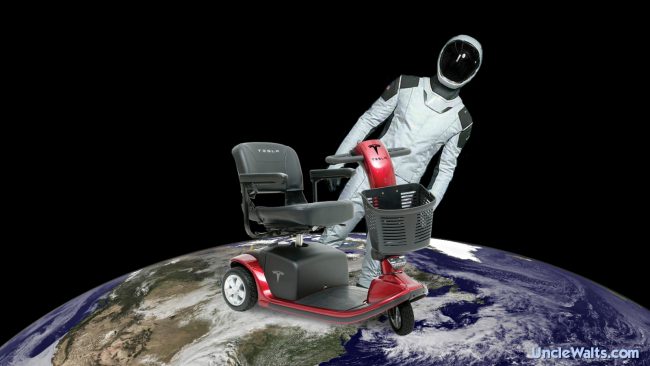 No longer will the scooters be driven by humans. Ankles everywhere rejoice.

Following the recent announcement of an overhaul of Mission: Space to feature a Tesla Roadster, Disney has announced another partnership with Tesla. Disney has contracted with Tesla to provide the tech company’s new self-driving Electronic Convenience Vehicles (ECVs) for rent in the Florida and California parks. The new, fully automated ECVs, code-named ECV+, will completely replace the current fleet.

Driver – and everyone else – beware

One of the biggest problems with the existing ECV fleet is that they’re driven by humans. Disney spokesperson George Lucas [Ed.: no, not that George Lucas] stated, “There are just too many driver issues with the current ECVs. For example, this week marks the fourth time since Valentine’s Day that we’ve had to eject guests because they were drag racing down Main Street. Plus, we see a large amount of drunk driving, particularly near the New Jersey pavilion at Epcot. With the ECV+, we’ll be able to avoid all of that. Angry guests won’t be able to run over other guests and steal their parade spot anymore!”

Tesla (Ed.: yes, that Tesla) has a solution to the human driver problem. After pioneering their “Autopilot” technology in their cars, they are now working to adapt it to ECVs. The ECV+ will be the first commercial application of the self-driving ECV technology. Tesla CEO Elon Musk has confidence in the system, and says it’s completely ready for any challenge that Disney parks can throw at it.

“Our Autopilot completely eliminates accidents. We’ve been using it in cars for about 12 years, never an accident. The driver doesn’t need to pay attention at all, the car does all the work. The technology is based on a proprietary blend of in-road sensors and GPS signals to deliver a completely safe driving experience.”

Although the Tesla technology has only been used in full-sized automobiles, the automaker is confident that the technology will be easily adaptable to ECVs. Mr. Musk continues, “It’s just a question of shrinking it down. And repaving Main Street USA to use our special in-road sensors. These sensors will allow the vehicle to detect the location of every other vehicle, stroller, small child, and churro cart. This way we can guarantee that you’ll never hit anything, regardless of whether or not you’re paying attention. We can completely eliminate ECV injuries and other forms of mischief. The only possible issue might be if they keep adding churro carts. The delicious cinnamon scent can sometimes interfere with the sensors. But it should be fine.”

Ezra “John” Watkins was spending time with his family in Disney’s California Adventure when he ran into an Uncle Walt’s reporter [Ed.: not literally]. “I used to work at Walt Disney World, back in my younger days. I’ve been run over by those gol-darned contraptions probably 10, 20 times. If they say they can make them safer, then they should stop talking and just do it. Automatic driving ECVs? What a thing! I’m all for it. What’s next? Ovens that clean themselves?”

Another guest, Freida Drivino, was opposed to the idea. “I don’t trust Elon Musk, and I don’t trust Tesla. I don’t think their ‘Autopilot’ is as safe as they say it is. Look here, I’ve got little kids. What if one of them gets run over? What if I get run over? Who would take care of my kids then? Lord knows my husband can’t do anything.”

Uncle Walt’s reached out to the current ECV vendor at the Disney Parks. A representative spoke to us on the condition of anonymity (although we overheard him answer the phone, identifying himself as “Alfie”), saying only “We’ll get them, my pretty. And their little Starman too!” [Ed.: Uncle Walt’s is not sure how to interpret this comment. We think it’s a threat, aimed at Tesla.]

March 9, 2018 by X in California, Florida
© 2020 Uncle Walt's Insider. All rights reserved. All images used with permission. Unless otherwise attributed, all images licensed under Creative Commons CC0 license. This site is protected by reCAPTCHA and the Google Privacy Policy and Terms of Service apply.