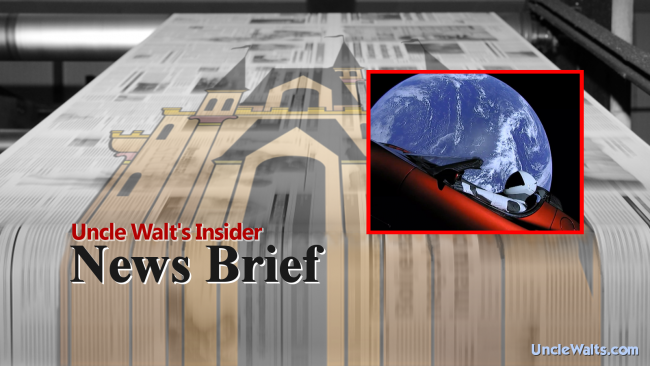 WALT DISNEY WORLD — Following the successful launch of the SpaceX Falcon Heavy rocket on Tuesday and the stunning imagery from space of the red Tesla Roadster high above the earth, Disney announced today that Epcot’s Mission:Space ride will be retooled to feature the Tesla vehicles. Disney Company spokesperson Jun Disney [no relation] told Uncle Walt’s Insider, “I know it’s only been a few months since we changed up the ride, but the launch Tuesday has really fired up everyone’s imagination. We think our guests will be thrilled to simulate driving their own Tesla Roadster to Mars, instead of a fictional ‘X-2 Deep Space Shuttle.'” The ride, to be renamed “Mission: SpaceX,” will be closed until early March for the refit. In the meantime, Epcot visitors can enjoy seeing the replica red Tesla Roadster being driven by Starman mounted above Spaceship Earth.

February 8, 2018 by Marty in Florida
© 2020 Uncle Walt's Insider. All rights reserved. All images used with permission. Unless otherwise attributed, all images licensed under Creative Commons CC0 license. This site is protected by reCAPTCHA and the Google Privacy Policy and Terms of Service apply.