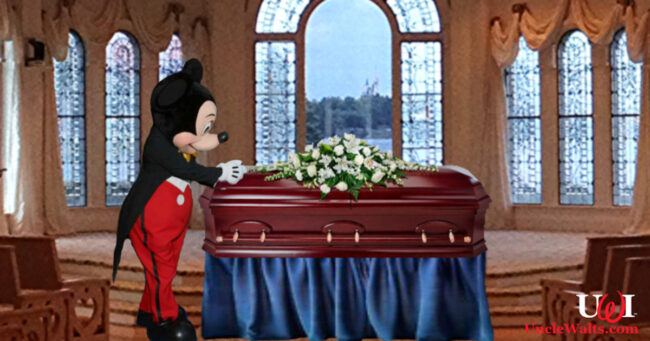 Would Disney exploit a health crisis to drum up business?

WALT DISNEY WORLD, FL — While many have questioned Walt Disney World’s decision to reopen its theme parks during the pandemic, some are suggesting a more sinister motive.

“They have a business built on death,” said our source, who asked to remain anonymous, referring to WDW’s Magical Funerals® services.

“I’ve been working with the Disney Magical Funerals® department for over a year. And you’d think that when the pandemic hit, our services would be in greater demand. But no, people were staying in, they weren’t working, so they didn’t want to ‘splurge’ on a fancy funeral with Mickey and Goofy among the mourners. Our numbers dropped like everywhere else.

“So when they pushed to reopen,” our source continued, “I was suspicious. I don’t have any proof, but it seems like something the company would do to drum up business. And we’re already starting to fill up our bookings! In fact, I think there’s like a two-month waiting list now.

“Oh, and one of my buddies in Custodial at the Magic Kingdom swears he saw Jafar coughing on people.”

We reached out to Disney (the company) spokesperson Jun Disney (no relation) for comment. She responded, “‘Reopen to increase Magical Funerals clients’? Don’t be ridiculous. We call them ‘guests.'”

Would you wait two months for your Disney funeral? Let us know in the comments below!

Cover photo: Mickey is totally not socially distanced from that coffin! Photo by Chad Sparkes [CC BY 2.0] via Flickr, modified.

July 24, 2020 by Marty in Florida
© 2020 Uncle Walt's Insider. All rights reserved. All images used with permission. Unless otherwise attributed, all images licensed under Creative Commons CC0 license. This site is protected by reCAPTCHA and the Google Privacy Policy and Terms of Service apply.