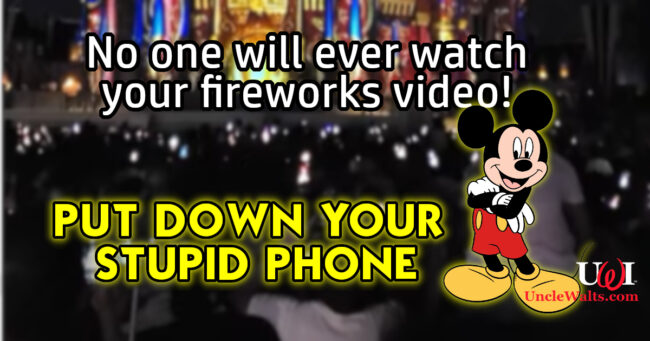 We missed these posters on our last visit, as we were too busy checking our Facebook notifications.

WALT DISNEY WORLD, FL — Disney has unveiled its new “celebration slogan,” which will be used in Disney Parks and Resorts worldwide: “PUT DOWN YOUR STUPID PHONE.”

“We wanted something that would appeal to all ages, and really capture the modern spirit,” says Disney (the company) spokesperson Jun Disney (no relation). “After loads of research, we settled on this one.

“Okay, it wasn’t so much ‘loads of research’ as it was a buttload of complaints from half of the guests in the hub each night, trying to see the castle projections around the cell phones of the other half.”.

So many ways to not use your phone!

Cute posters and signs are going up around parks worldwide, pairing the slogan with different, common scenarios. Some of the favorites we’ve seen:

.
The new slogan will be used throughout the 50th anniversary celebration for Walt Disney World, or until stupid guests get the message. So, probably forever.

Which is your favorite? Let us know in the comments below!

Cover photo: Does anyone ever just watch the fireworks without filming any more? Screen capture from video by REDACTED via YouTube. (Named redacted to prevent him embarrassment, given the tone of the article.

September 5, 2021 by Marty in Florida, World
© 2020 Uncle Walt's Insider. All rights reserved. All images used with permission. Unless otherwise attributed, all images licensed under Creative Commons CC0 license. This site is protected by reCAPTCHA and the Google Privacy Policy and Terms of Service apply.