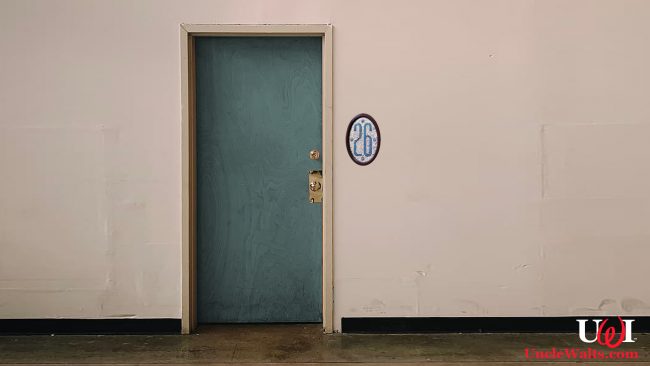 ORLANDO, FL — Last week Uncle Walt’s Insider reported on the disappearance of Carousel 26 at the Orlando International Airport (MCO) baggage claim. As it turns out, in a rare case of our reporting being slightly incorrect, the missing carousel may not be missing after all.

Instead of being stolen, Baggage Carousel 26 is apparently behind closed doors, accessible only to members of an elite club, possibly known as “Club 26.”

How did we miss that?

While our reporters spent literally minutes poring over the entire “crime scene” before reporting on the missing carousel, at the time no one noticed an unobtrusive door in a nearby wall, painted in “Go Away Green,” pictured above. [Ed.: You’re kidding, right? There’s no door in that picture.] Next to the door is an ornate sign containing only the number 26.

We have not yet gained access to the room, but we suspect it may be like Disneyland’s exclusive Club 34. Ub thinks he knows a guy who once dated someone who later married the cousin of a member, so we should be in shortly. We’ll report back once we get the scoop.

Do you know someone who can get us in? Let us know in the comments below!

February 21, 2020 by Marty in Florida
© 2020 Uncle Walt's Insider. All rights reserved. All images used with permission. Unless otherwise attributed, all images licensed under Creative Commons CC0 license. This site is protected by reCAPTCHA and the Google Privacy Policy and Terms of Service apply.