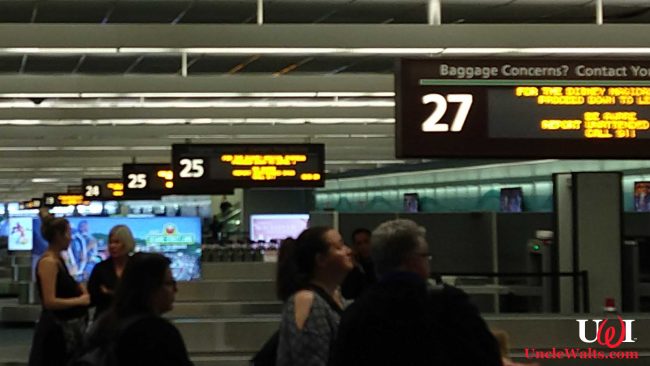 We noticed the missing carousel once we remembered that there is a number between 25 and 27.

The theft was reported Monday after a passenger mistakenly that their luggage would be on Carousel 26. According to sources, the unnamed passenger searched between Carousels 25 and 27 for over three hours without success. Sources estimate that the value of the equipment at over $75,000.

Baggage Carousel number 26 was located on Level 2 of the “B” terminal. Terminal B is the southern half of the main terminal, and is home to several airlines, including American, United, Delta, and several international carriers. Airline officials have said that no passenger luggage was on the carousel at the time of the theft.

Where in the world is the suspect?

“On reviewing the security footage, we caught a glimpse of the criminal mastermind responsible. Police are looking for a caucasian female, roughly 5’9″, dark wavy hair, wearing a red trench coat and a red fedora. Detectives have said that she’s has been responsible for crimes around the world, from Kiev to Carolina, Berlin to Belize. She’s also been known to run scams in Scandinavia.

“If you see this sticky-fingered filcher, do not attempt to apprehend her yourself. She should be considered armed [Ed.: We have seen the security footage. She does indeed have arms] and dangerous. If you have any clues to her whereabouts, please contact the ACME Detective Agency.

“Finally, there’s only one thing left to do. You know what it is.”

Did you sing along with Rockapella? Let us know in the comments!

February 11, 2020 by X in Florida
© 2020 Uncle Walt's Insider. All rights reserved. All images used with permission. Unless otherwise attributed, all images licensed under Creative Commons CC0 license. This site is protected by reCAPTCHA and the Google Privacy Policy and Terms of Service apply.