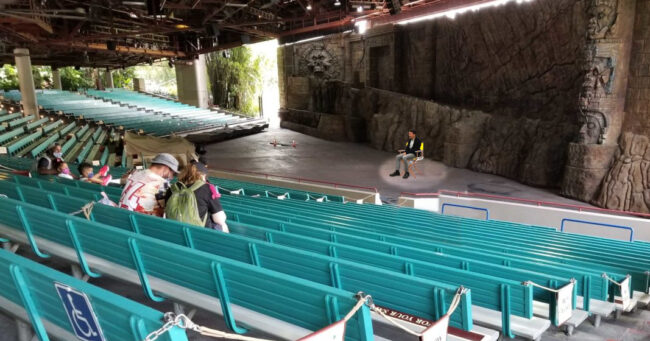 Now for the disappointing details.

The rest is bad news

Fans of this show will be disappointed (much like the fans of other Disney live entertainment) to learn that Disney’s Covid distancing rules means the actors cannot come within 6 feet of each other. [Ed.: Uncle Walt’s Insider will have an article soon on all of the other weird things Disney is doing to “battle Covid.”]

Other changes are coming as well. For example, guests will no longer be picked as Extras. This is not actually due to Covid rules, but because the Stage Actors Guild protesting unfair hiring practices, saying the “extras” were cheating them out of high-paying union jobs. (And we all know that getting money out of Bob “Bob” Chapek is harder than getting a dime from Scrooge McDuck.)

Okay, let’s just run through the other changes we know about:

.
So basically, the whole show is so watered down that it will just be a single actor sitting on a chair telling guests a high level tale made up from all of the Indiana Jones movies, with some references to the The Young Indiana Jones Chronicles TV show. With sound effects.

Meanwhile Universal is allowing guests to snuggle up to the Grinch for photos. Disney is really starting to suck, amirite? Let us know in the comments below!

December 12, 2021 by Walt in Florida
© 2020 Uncle Walt's Insider. All rights reserved. All images used with permission. Unless otherwise attributed, all images licensed under Creative Commons CC0 license. This site is protected by reCAPTCHA and the Google Privacy Policy and Terms of Service apply.