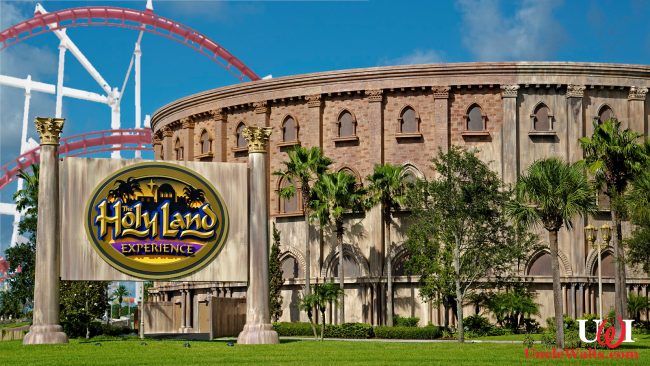 Out with the King James Version, in with the drums and smoke machines.

ORLANDO, FL — Orlando’s #1 [Ed.: Hashtag 1? What does that mean?] tourist attraction, The Holy Land Experience, is making even more drastic changes to grow their attendance. In addition to adding new thrill rides, the park is also changing signage and updating costumes. They hope to attract a younger generation by moving from being a “traditional” to a “contemporary” Bible-based destination.

“We considered just banning old people, like that church in Minnesota,” says Land (no relation). “But then we’d have, like, zero revenue until the younger folks started coming. So we’ve looked into other options.

“In order to become more relevant, management has recognized that we need to make some changes. See, kids these days aren’t used to the old school way people used to talk. And by old school, I mean really old school. So to attract a younger crowd, and make more money, we’re not only adding those thrill rides, but we’re also going to update signage. Out with the King James Version of our signs, and in with, no, no, not New King James Version, but we’re going all the way to The Passion translation!

“We’re not stopping there either. We’re going to update our costumes. No more robes, tunics, long gowns, sleeveless tunics, and wimples. We’re bringing in the skinny jeans, t-shirts with cool/relevant logos that look secular, but are really talking about JC. As in Jesus Christ.

“We’re also updating how we market as well! The male employees will still be allowed to grow beards, but they no longer have to be ‘Moses-length.’ We’ll even allow for some variations in styles. Man buns are also encouraged! While we’re still not going to allow women into upper management, we will allow them be in guest-facing roles, such as a greeter, waitress, or custodian.

“We’re also going to add smoke machines to all areas of the park, as well as updated light effects. And live entertainment, let me tell you, we got a great idea that is totally not ripped off from any other Orlando area amusement park. We got some great deals on drummer cages, so look for caged drummers to pop up all over!

“We think these changes are going to take us from squares to the cool cats. Sock it to me, Daddy-O! Oh my! I feel tingly!”

Uh…. Let us know in the comments below!

Cover photo: Huh. We really figured they’d use The Message version, not Passion. Photo by Zfigueroa [CC BY-SA 4.0] via Wikimedia.

January 28, 2020 by Walt in Florida
© 2020 Uncle Walt's Insider. All rights reserved. All images used with permission. Unless otherwise attributed, all images licensed under Creative Commons CC0 license. This site is protected by reCAPTCHA and the Google Privacy Policy and Terms of Service apply.