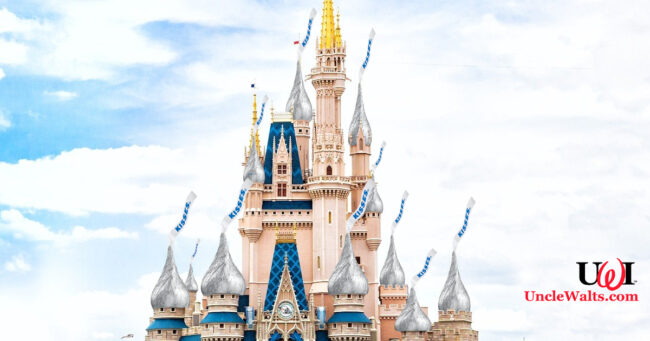 Chapek: “Hey, it makes money for the shareholders.”

“It’s a win-win, as far as I see,” Chapek said. “Hershey gets the number one theme park destination in the world. And Disney gets money. Lots and lots of money!”

Chapek hinted that more sell-offs were in the works.

“Oh, not all to Hershey, no. Busch Gardens has had its eyes on Animal Kingdom for some reason, Universal is looking to buy the Studios, and Silver Dollar City wants a piece of Disneyland Texas. There’s a buyer interested in every Disney park except California Adventure, but we hope to unload it to Six Flags in a bundle with Tokyo DisneySea.”

Meanwhile, efforts to boot Chapek as CEO have suddenly gone into overdrive. Check back here for more on this ongoing story.

Would you go to Six Flags DisneySea? Or California Adventure? Let us know in the comments below!

January 5, 2022 by Marty in Florida
© 2020 Uncle Walt's Insider. All rights reserved. All images used with permission. Unless otherwise attributed, all images licensed under Creative Commons CC0 license. This site is protected by reCAPTCHA and the Google Privacy Policy and Terms of Service apply.